Home » Nets’ James Harden on return to Houston: I wanted to ‘give them a show’ 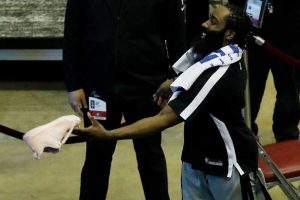 Nets guard James Harden knew he’d get a reaction from the fans Wednesday night as he played in Houston for the first time since forcing his way out of the city via trade.

It turned out to be a mix of boos and cheers from the few thousand fans who were allowed into the Toyota Center.

Harden acknowledged the cheers that flowed after the Rockets’ in-game tribute video.

He left town with a smile after leading another Brooklyn win.

What did Harden say about the fans’ treatment of him?

“A lot of mixed emotions from the fans, but (I) knew that was going to happen. I just wanted to come out here and give them a show.”

How he learned the Rockets will retire his No. 13 in the future

“Ummm, on the internet.”

What was his reaction to the news?

“My reaction was, ‘Hopefully, I did something right.’ Obviously I came up short of a championship. But the work on and off the court that I put in over those past eight years was elite. Obviously I think that’s the only thing that I didn’t do or didn’t accomplish is the championship, which is difficult to attain.

“But as far as bringing excitement to the city, taking care of the fans on and off the court is something that I tried to contribute, so hopefully that outweighs that.”

How much of a show did Harden give the fans?

Harden put up his eighth triple-double in 23 games with Brooklyn, which already places him second in franchise history behind only Jason Kidd’s 61. The Beard had 29 points, 14 assists and 10 rebounds in 41 minutes. He was a highly efficient scorer, too, shooting 10 for 15 from the floor (4 for 8 from 3) and 5 for 7 from the line.

“You could tell it meant something to him,” Nets coach Steve Nash told reporters, per The Associated Press. “This place is special to James. Houston means a lot to him … so I know it was a big game for him. I was proud of the way he handled it.”