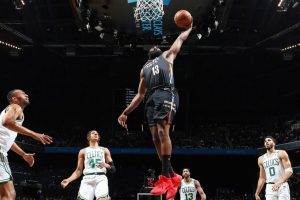 Brooklyn Nets guard James Harden is making strides in his hamstring rehabilitation, coach Steve Nash said ahead of Game 4 against Milwaukee on Sunday.

“I asked him and he says he’s feeling better, doing better,” Nash said. “I asked the staff, they say, ‘Yeah, it’s getting better.’ I think he’s in that arena where he’s got a little gap to make up. But he’s getting closer, so it’s been positive.”

Harden missed 18 games in the regular season with a right hamstring strain. Before that, he missed two games with right hamstring tightness. That history is causing the Nets to exercise added caution in bringing Harden back. Nash said that he will need to complete several “high-intensity” workouts before he is cleared to play in a game.

“When he’s able to get up to full speed and do it for two or three days without recurrence or setback,” Nash said, “then I think that’s kind of the marker.”

Brooklyn big man Jeff Green, who has been sidelined since the Nets’ first round series against Boston with a strained left plantar fascia, is available to play in Game 4. Nash said that Green, who last played on May 25, “isn’t expected to play a ton of minutes” on Sunday.

Nash said that Green has been on the court with the team in practice the past few days and has been working out ahead of games. Still, Nash said that was in a controlled environment.

“I think a lot of unknowns,” Nash said of Green. “Nice to have him back for sure. But we’re not sure what he can do and manage and how sharp he’ll be, but we hope that we have the option of using him.”