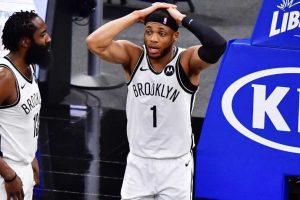 Usually, when you have two All-Stars on the court with you, you’re supposed to defer to them in late-game situations. But that’s not what Bruce Brown did for the Nets on Thursday night.

In Brooklyn’s Game 3 loss to the Bucks, Brown took two of the final three shots for the Nets. He missed them both and that contributed to Brooklyn’s 86-83 defeat.

When Brown took his first shot, a mid-range 15-footer, the Nets were up one point with 20.3 seconds left in the game. When he shot his next one, a layup attempt, they were down one point with about six seconds left. Durant had a chance to tie the game with a 3-point shot late, but he couldn’t hit it.

In fairness to Brown, he had 16 points on 8-of-15 shooting before his last two shots. So, it’s not like he was having a bad game. It’s just unusual for a role player to serve as the primary shot creator for any team late, let alone one as star-studded as Brooklyn.

DECOURCY: Why Charles Barkley shouldn’t have a problem with super teams

Brown’s decision to take matters into his own hands led to a lot of jokes from NBA Twitter. And most came at his expense. (Warning: Some of these tweets/videos contain NSFW language).

These are hilarious as a whole, and surely Brown understands why NBA fans are poking fun at him. Had he made the shot, things certainly would have been different, but for now Brown is the punching bag of NBA Twitter.

It’s safe to say that if Brown finds himself in a late-game situation again, he’ll likely defer to Durant, Irving and James Harden. Otherwise, he’ll risk drawing attention to himself for the wrong reasons again.