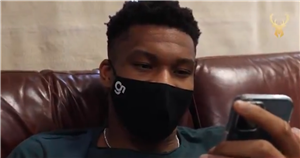 The 26-year-old reached the pinnacle of his sport last month as he led the Milwaukee Bucks to their first championship title for 50 years.

In the wake of their victory, the team surprised their star man with a message from one of his childhood heroes.

The franchise posted a short clip of the Greek Freak listening to Henry’s message and captioned the post: “We surprised @Giannis_An34 with a special congratulatory message from his childhood idol, @Arsenal legend, Thierry Henry.”

“Is that Henry?” a surprised Antetokounmpo asked.

He listened intently as the Frenchman said: “Hello big man, this is Thierry. Just wanted to congratulate you and say to you, finally!

“I remember you telling me you’re going to be a champ one day and you will do everything in your power to be a champ, now you’ve done it.

“So now enjoy it, and see you soon champ. You said it, and you delivered it, see you soon.”

The basketball player sat back in his seat in disbelief after hearing the kind words from the World Cup winner.

“This message meant a lot to me from him, and as he said we did it, we did it together.”

He ended the video by thanking Henry for his congratulatory message.

“A message like this coming from a legend? That’s big, that’s big time", the NBA star added.

“Thierry, thank you so much if you’re watching this video, thank you.”

Antetokounmpo produced one of the all-time great performances in NBA finals history against the Phoenix Suns.

He averaged a staggering 35.2 points, 13.2 rebounds, 5.0 assists, 1.2 steals and 1.8 blocks throughout the series and was subsequently named NBA Finals MVP.

These numbers are the more impressive given he sustained a knee injury in the previous series against the Atlanta Hawks, where the initial thoughts were his season may have been over.

Antetokounmpo also mentioned in the clip what he and his team need to do as they prepare to defend their title next season.

He explained: “We’ve got to keep working hard, keep staying humble, keep being grateful of the moment and what we have accomplished, but we’ve just got to put our head down and keep working.”