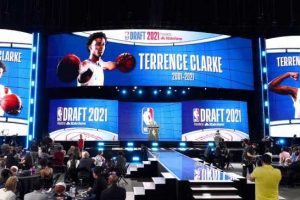 Midway through the first round of Thursday night’s NBA draft, the league briefly paused its annual selection show to honor the late Terrence Clarke, the 19-year-old basketball prospect out of Kentucky who died in a car accident earlier this year.

Commissioner Adam Silver paused the draft and invited Clarke’s mother, sister and brother onto the stage, as the NBA selected Clarke — giving him the honor he would’ve received had the tragedy earlier this year not taken place.

“He was so ready for it, so excited,” his mother, Osmine, said in an interview with ESPN that aired after the selection was made. “It’s all he talked about, just going to the draft, like, ‘Mommy, am I ready for this? This is big.’ And I’m like, ‘Yes, Terrence, you wouldn’t be in this position if you didn’t, if people didn’t think you were this good.”

Tributes after the NBA’s selection poured in on social media.

Clarke, who was a prep star in the Boston area before playing collegiately at Kentucky, averaged 9.6 points in eight games for the Wildcats last season, as a right leg injury cut his season short. He was working out in Los Angeles at the time of the fatal accident.