Home » NBA Roundtable: Tom Thibodeau has the Knicks on the rebound. But how long can it last?

NBA Roundtable: Tom Thibodeau has the Knicks on the rebound. But how long can it last? 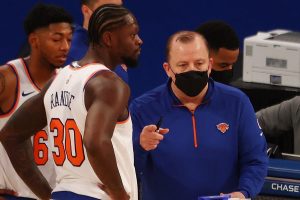 The resurgent New York Knicks have been one of the NBA season's most pleasant surprises.

With less than three weeks left in the regular season, the Knicks are poised to make the playoffs for the first time in eight years. Their recent nine-game win streak vaulted them to fourth place in the Eastern Conference with 10 games left.

How do we assess New York's turnaround? How much noise can the Knicks make in the playoffs? And where does Julius Randle fit in the All-NBA discussion?

This week's NBA roundtable went deep on all things Knicks. USA TODAY Sports' Matt Eppers moderated the discussion with a panel of NBA experts from around the USA TODAY Network: Jeff Zillgitt and Mark Medina of USA TODAY Sports, Berry Tramel of The Oklahoman, Marla Ridenour of the Akron Beacon Journal and Omari Sankofa II of the Detroit Free Press.

Eppers: The Knicks' win streak was snapped Monday night, but a loss to a team like the Suns doesn't change their trajectory at this point. Barring a collapse, they're going to make the playoffs. What do we make of the job Tom Thibodeau and that front office have done to turn things around so quickly?

Medina: I'm torn by whether Thibs get Coach of the Year, but he's right up there. It was expected he would produce instant results, but he is good his first year with raising a team's accountability and work ethic. But I'm also encouraged that the Knicks are doing a good job with player development and that this could be long term. After covering Julius Randle's first few seasons with the Lakers, it's also been cool to see from afar how much he has grown into an All-Star player.

Ridenour: Goes to show what a defensive transformation can do. They rank 26th in the league in scoring (106.9) and first in points allowed (105.0). That takes a buy-in in terms of effort and commitment. You don't have to have a roster loaded with stars to pull that off, but you do have to get them to believe in it.

The times I've seen Julius Randle against the Cavs this season, I've been so impressed at how he's raised his play to an elite level. Never struck me as being that kind of player before.

Tramel: The question on Thibodeau always is long term. Does he wear out his welcome? Do the players tune him out? His early success at each stop — 62-20 in Year 1 Chicago, 47-35 in Year 2 Minnesota — shows that he has shock value. But it can wear out. Not that that makes the Knicks leery. Any kind of success in New York is good, and this season is legit.

Sankofa: They have a clear identity for the first time since the Carmelo era, and they’re a lot of fun to watch. Thibs and the front office deserve a ton of credit, but Julius Randle hasn’t gotten quite enough credit for becoming a true alpha dog, I feel.

Zillgitt: Tom has inserted himself into the coach of the year race, and he might be doing the most impressive job, especially weighed against expectations. It's the defensive buy-in that got this started (No. 4 in the league) and now the offense is coming around. Julius Randle (All-NBA???) has been a revelation and R.J. Barrett has made a big leap and a bunch of other players have made solid contributions. Not sure anyone expected this kind of dramatic improvement in year one — the fourth spot ahead of Miami and Boston? Find me the person who predicted that.

Medina: Julius Randle is going to continue to blossom. His early struggles in his career mostly had to do with two things. 1. Decision making. He could be a bull in a china shop, force shots or collect silly fouls. 2. Those mistakes compounded his frustration. But the Lakers and the Pelicans were always encouraged with Randle's work ethic and that his intentions were pure. He was trying to figure out how to maximize his unique skillset as a play-making point forward that can bully opponents inside, set up teammates for easy baskets and occasionally drain the outside shot. He's been figuring that out much better, and it's been a treat to watch.

Ridenour: To Jeff's point, what strikes me most is yes, Randle is the alpha dog, but so many are contributing. Where would they be without Immanuel Quickley? And if Obi Toppin can give them more going forward, they could be even more interesting.

Tramel: It's an interesting mix. But I still don't know if it's sustainable. Even if Randle maintains this level of play going forward, it's not an ultra-talented roster. Thibodeau still will have to coach his butt off going forward, and while that's feasible, the Knicks have the ultimate albatross. Bad ownership. You can't overcome bad ownership. Not on any sustained basis. Clippers didn't. Timberwolves didn't. Kings haven't. Thibodeau doesn't suffer fools gladly.

Medina: Berry raises a good point about Thibs. I think two unique things are in his favor. Unlike in Minnesota, Thibs seems to have the buy-in from all players, not just Jimmy Butler. Unlike in Chicago and Minnesota, he seems to have a much better relationship with the front office. That can always change in the NBA, and the Knicks have never had a good track record of having synergy. But I think there are tangible signs with the new front office and coaching staff that they've turned a corner enough that it's not going to be complete chaos all the time.

Zillgitt: I appreciate what Quin and Monty have done. But the Jazz have been good. The Suns added Chris Paul. The Knicks' most significant change is at head coach.

Medina: But as Berry mentioned, Knicks have bad ownership. And Dolan always has a way of getting in his own way because he wants to have his own way.

Ridenour: So many of their feats go back years. Longest win streak since 2012-13. Randle is the first Knick with at least five triple-doubles since 1981-82. Those things don't seem like flukes.

Tramel: I would vote Thibodeau coach of the year. Snyder second.

Ridenour: Thibs should get bonus votes for the Dolan factor.

Eppers: The defensive buy-in has been complete and as Omari said, that gives them an identity for the first time in a long time. It should keep them in most games, even against some of the top teams in the East. Where does that put their ceiling this season? Are they the favorite for the 4 seed?

Ridenour: Wondering if Boston has enough time to move up to the fourth spot.

Sankofa: They’re really not that deep, which makes me wonder how sustainable this is. I would still take the Celtics over them if that’s the 4 vs 5 matchup.

Zillgitt: Knicks should finish with the fourth seed. Shoutout to Nate McMillan for what he has done with the Hawks. But too many injuries might be too much for Atlanta to get No. 4. Haven't seen enough from the Celtics to think they will move up to No. 4.

Sankofa: I do think the Knicks will hang onto the 4 seed. Hawks looked terrible on Monday against the Pistons without Trae. Celtics haven’t been able to sustain any success during the regular season. Knicks are peaking at the right time.

Medina: I would choose the Celtics as a 4 seed. Their struggles earlier in the season mostly had to do with health. Technically, they have lost four of their last five. But they have mostly turned things around after winning eight of their previous nine. They're not on the same level, though, as Brooklyn, Philadelphia and Milwaukee.

Zillgitt: Interesting scenario for the Nets: Bucks or Knicks in second round if all advance. As Berry and Mark said, the top 3 in the East are significantly better — and while getting the Bucks in the second round won't be fun, more pressure would be on the Nets in a Knicks-Nets matchup.

Ridenour: Would love to see Nets-Knicks. Old glory rising vs. a team that jumped on the talent-stacking train. What possibilities for drama.

Eppers: Assuming the Knicks stay in the 4-5 matchup in the first round, how good are their chances to win that series? It seems like many of us like their odds of advancing.

Tramel: It won't be easy for New York. The Heat and Celtics are playoff-tested. Which matters. Miami is a mystery, but who truly believes they will be an easy out, so long as Jimmy Butler and Bam Adebayo are healthy.

Sankofa: I don’t think they can survive any off nights from Randle. Heat and Celtics are both more experienced, and the Hawks have much more firepower offensively. I think the Knicks will drag any series to six or seven, but I’d probably favor the Heat or Celtics over them in round 1. Hawks is a toss up.

“The Knicks will benefit from playoff experience, and that's huge for that team's future.”

Ridenour: Knicks are going to need to elevate their play and get big contributions from five-plus guys. I've always felt Derrick Rose stepped up when the lights were brightest, so perhaps he can help. If they're facing the Heat, though, would have to go with the Heat, despite where they stand now.

Medina: I don't see the Knicks advancing. Their ceiling is just the first round. And then next year, they could make another leap depending on how their young players continue to develop and they make any other roster moves.

Zillgitt: Like Omari said, Knicks peaking at the right time. It's been a slow build all season. The Celtics have deep concerns — health, depth, consistency. I realize a handful of teams are bunched in those 4-8 spots (9 if you want to include the Pacers) so it won't be easy for any of those teams to get out of the first round but I just don't have a lot of trust in Miami or Boston right now.

I know every NBA team has bad losses but it seems I've watched a lot of disappointing games from Miami and Boston. Miami losing at home to Chicago (Monday) night being one. Boston getting clobbered by Charlotte the other day.

Eppers: I think I was maybe inflating what we thought of the Knicks long-term. They've done well this season, but we're still tempering our expectations big-picture. At least for this year's playoffs.

Tramel: Still, I wouldn't want any part of Miami in the playoffs, if Butler is OK. I think the Heat is 26-19 with Butler this season. Not world-beaters, but not hovering around .500. Everyone has injuries, I know. But Miami seems to be depend on Butler's fire especially.