Home » NBA » NBA playoffs MVPs: Ranking the best performances from the first round

NBA playoffs MVPs: Ranking the best performances from the first round 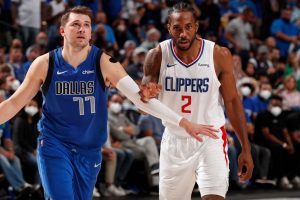 The opening round of the NBA playoffs is complete. And what a finale it was: a LA Clippers’ clutch Game 7 performance against Luka Doncic and the Dallas Mavericks sent Kawhi Leonard, Paul George & Co. to a Western Conference semifinals meeting with the Utah Jazz.

Before the Clippers and Mavs duked it out, a host of other stars took care of business in the first round: Giannis Antetokounmpo and the Milwaukee Bucks swept the defending East champion Miami Heat, while the Brooklyn Nets and Philadelphia 76ers each needed just five games to reach the conference semifinals.

But which of those stars is the MVP of Round 1? Our panel of NBA experts makes its picks.

Doncic set the bar ridiculously high during his playoff debut last season, putting up massive numbers as the overmatched Mavericks pushed the Clippers to six games in the first round. He raised that bar in this postseason’s rematch between the teams, regardless of losing the series.

Carrying as heavy an offensive burden as anyone in the playoffs, Doncic averaged 35.7 points and 10.7 assists, a significant bump to his mind-boggling statistics (31.0 points, 8.7 assists) during his first NBA playoff appearance. And Doncic’s stats in this series are skewed by his rough Game 4 performance, when the cervical strain in his neck prevented him from even looking to his left without excruciating pain.

“Oh man, he did everything,” Clippers star Kawhi Leonard said.

Doncic did this with his supposed co-star, Kristaps Porzingis, reduced to a max contract role player. Mavs head coach Rick Carlisle determined that Porzingis can best help the Mavs attack the Clippers’ small-ball lineups by spacing the floor to maximize the room that Doncic has to work his magic.

Of course, the reason that the Clippers scrapped their regular starting lineup to go small is because Doncic is so dangerous. He put a bullseye on LA center Ivica Zubac so often early in the series — exploiting him over and over again on switches — that Clippers head coach Ty Lue had no choice but to banish the big man to the bench.

Doncic, who won titles with Real Madrid and the Slovenian national team as a teenager, craves this kind of stage. He proved that in last season’s playoffs. No, the Mavs didn’t make it out of the first round, but his Game 4-winning, buzzer-beating step-back 3 to cap a 43-point triple-double was one of the bubble’s signature moments.

The Mavs fell short again Sunday despite Doncic accounting for 77 points (scoring 46 and dishing out 14 assists), the most ever in a Game 7.

“Even before this series started, I think he’s proven he’s a top-five player in the world,” Carlisle said. “This series certainly validates that.”

Last summer, Antetokounmpo and the Bucks were humbled by the Miami Heat in the second round of the playoffs. An offseason of introspection followed, as well as changes to both the roster and Milwaukee’s approach. All of it was put to an immediate test in the first round, when the same matchup presented itself.

Antetokounmpo responded by leading Milwaukee to the most surprising, and most impressive, result of Round 1: a four-game sweep of the defending Eastern Conference champions, including the final three games all in runaway fashion.

Antetokounmpo’s stat line was far from perfect — he shot 45.9 percent from the field, and 1-for-16 from 3-point range — but what stood out about his performance was the way he, and by extension the Bucks, confronted their past demons.

After being criticized in the past for not taking on the challenge of guarding the opposition’s best player at times, Antetokounmpo guarded Jimmy Butler for much of the series, and Butler struggled, shooting 19-for-64 over the four games. Meanwhile, after the Heat successfully created a wall that repeatedly frustrated Antetokounmpo in last year’s playoffs, he had an impressive 31-12 assist to turnover ratio in the first round, including a 15-assist masterpiece (with just two turnovers) in Game 4.

That series alone won’t change everything that’s happened to Milwaukee the past two years. Only winning this series against the Nets — and two more beyond it — will fully change that chatter. But for a team that has so much on the line this postseason, the first round rematch with the Heat offered an opportunity for both Antetokounmpo and the Bucks to produce the same old story, or to write a completely new script.

It didn’t take long for them to show this year may be different. And it was Antetokounmpo, as always, who led the way.

The Maestro of Madison Square Garden impressed in his first playoff appearance. Analysts long wondered whether Young’s small stature would become an issue against defenses that had the opportunity to plan how to get the ball out of his hands and offenses that targeted him on switches.

So far, the answer is Young has been better than ever in the postseason, producing a combined 52 PPG between his own scoring and points generated by his assists, the fourth-highest total in the opening round.

Young’s finish in this list reflects both the quantity of his contributions and their timeliness. Making his postseason debut, he scored 13 points and handed out three assists in the fourth quarter of a taut Game 1 at the Garden, capped by the winning floater with less than a second remaining and the game tied. All told, Young scored 41 points in 40 fourth-quarter minutes, tied with Memphis Grizzlies guard Morant for the most in the final frame during the first round.

As impressive, Young delivered repeatedly in a hostile environment, with Knicks fans chanting at him from before tipoff to when he shushed them at the end of Game 1 and took a bow following Atlanta’s deciding Game 5 road win. On the NBA’s most famed stage, Young conducted the show from start to victorious finish.

If anyone needed a reminder of Leonard’s greatness — and more specifically, playoff greatness — Games 6 and 7 are the latest installments into the lore.

The 45-point performance in Game 6, on 18-for-25 shooting, while also taking on the primary second half assignment of guarding Doncic, should be the kind of game that goes down as an all-timer in a road elimination game.

The Game 6 wizardry would be moot without an encore, and Leonard delivered again. He dropped 28 points on another ridiculously efficient 10-for-15 shooting, adding 10 rebounds and 9 assists, along with more individual defensive excellence on Doncic (even though Doncic did score 46).

For the Clippers, it was a potential defining moment for the franchise, backed into a corner with the memes and jokes ready to roll, and the front office potentially tasked with harsh reality after another early postseason exit. And for Leonard, too, it could forced some unexpected evaluation of his own future, asking questions of the supporting cast in LA or if this whole thing was the right move after all.

But Leonard rescued the Clippers from it, at least for another few weeks. He came alive at the moment the Clippers had to have him, responding to a subpar Game 5 that put their backs against the wall. He has established himself as one of the players to fear most in a Game 7, because in a game that can hinge on emotional swings of momentum, Leonard’s robotic killer instinct shines through it.

Technically speaking, Lillard’s 55-point masterpiece in Game 5 against Denver was not enough. The Nuggets won and went on to eliminate the Blazers in Game 6. But here’s the thing, Lillard’s incredible shooting outburst proved he’s one of the most lethal crunch-time performers this league has ever seen. If that’s not valuable, I don’t know what is.

Lillard broke the record for most 3-pointers ever in a series in just six games, but his team failed to match his intensity and his execution. He deserves a better supporting cast, one that complements him with better defense and more interior scoring.

It would be great to see Dame Time in the NBA Finals, but unless his supporting cast gets better, that won’t happen.

Booker delivered an all-time performance in Game 6 as his Suns closed out the Los Angeles Lakers in the first round. Booker’s 47 points — on 15-for-22 shooting with eight 3-pointers — was a masterful final act as he closed out his first ever playoff series. Oh, and he did it while playing 46 minutes, staying hot until the end.

Following the game, Booker told reporters that he was thinking about Lakers legend Kobe Bryant throughout the night and the conversations the two had previously.

According to the Elias Sports Bureau, the 47 points are tied for the most in a player’s first career series-clinching opportunity. He’s tied with Anthony Davis — who played just five minutes for the Lakers in Game 6 before leaving with his groin injury — who had 47 in a closeout game against the Trail Blazers in 2018.

Booker scored 30 points or more four times in the series and really had to shoulder the load for Phoenix as point guard Chris Paul was dealing with an injured right shoulder. After the Suns fell down 2-1 to the Lakers, Booker averaged 31.3 points and 8.3 rebounds on .559/.524/.944 shooting splits in Phoenix’s three consecutive series-clinching wins.