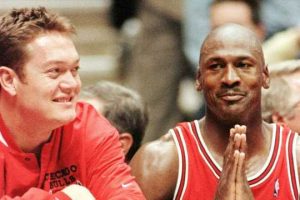 Michael Jordan has revealed he deeply regrets his former Chicago Bulls teammate Luc Longley was not included in the popular Netflix documentary series The Last Dance.

Longley played a major role alongside the likes of Jordan, Scottie Pippen and Dennis Rodman in the Bulls’ second championship three-peat in the 1990s in one of the greatest sporting teams of all time.

But the Australian was strangely omitted from the documentary series that captivated sporting fans around the world last year.

The 220cm giant has now revealed his disappointment at seeing his role in the champion Chicago team reduced to insignificance and appearing in the occasional background shot.

“Sitting there on the couch and watching episode after episode where I wasn’t in it — yeah, I was bummed about that,” Longley told the ABC’s Australian Story program.

“Why was I not in the doco? I don’t really know, to be honest.

“The self-deprecating Australian in me thinks it’s because I’m not that exciting. I was playing a huge role but it wasn’t one that was that sexy.

Luc Longley’s famous Chicago Bulls teammates including Michael Jordan were disappointed he was left out of
The Last Dance. Source:AFP

“There were so many beautiful, bright, shiny stars out there to focus on, that, you know, it makes sense to me that that story wasn’t about me. Makes perfect sense.

“I didn’t expect to be a heavy feature in it because they hadn’t interviewed me, but I did expect to be in it more than I was.

Longley’s biggest regret of not being included in the documentary is that the Australian side of the Chicago Bulls and making it in the NBA was not told.

“I would like to have been in the doco so that Australian kids saw that there was an Australian in that team doing that thing,” he said.

“I think the worst part for Luc was that the phone was ringing all day and night,” says Longley’s wife, celebrity chef Anna Gare said.

“Everyone wanted to know, ‘Why aren’t you in it? … How are you feeling right now?’ Like, drama, drama, drama.”

Longley famously declined all requests for interviews about the documentary and even changed his phone number so he’d stop receiving calls from the media.

“I didn’t say anything in the media because I hadn’t finished seeing it and I didn’t know what to say,” he said.

“Certainly nothing constructive at that point.”

Luc Longley was a key part of the Chicago Bulls second three-peat in the 1990s alongside Michael Jordan.Source:AFP

It was just too expensive to fly a television crew from the US to the remote part of Western Australia where Longley lives.

Jordan, who played with Longley for the Bulls’ second three-peat in 1996-1998, revealed he deeply regrets his teammate was left out from the docuseries.

“I can understand why Australia would say, ‘Well, why wouldn’t we include Luc?’ And we probably should have,” Jordan said.

“And if I look back and could change anything, that’s probably what I would have changed.”

Steve Kerr, another key member of the Bulls’ second championship run, was also disappointed Longley wasn’t included in the documentary.

“I watched it with my kids and I thought about Luc’s omission from it and how much he lost from that, and I feel bad for Luc.”

Jordan, a six-time NBA champion, was notoriously hard on his teammates as he drive high standards for the Bulls.

The six-time NBA champion is interviewed in the new program and praised Longley’s basketball ability, while admitting he pushed him to get the best out of himself.

Longley was the first Australian to play in the NBA and win a championship. (AAP Image/Julian Smith)Source:AAP

“He had the skill set, you know,” Jordan said. “He could shoot, he was very smart, good passer. He knew how to position himself well.”

“I don’t think Luc had the mentality of what it took to win. I felt the need to push him.

“You had to show him a little tough love, you know. That’s what I call it – tough love.”

Longley also opened up on his off-court relationships with Pippen and Rodman, which blossomed amid the rock star atmosphere of the Chicago Bulls in the late 1990s.

“I tended to roll with Dennis a bit after the game and ended up in some places that I wouldn’t have otherwise ended up in, which I’ve put in the life experience bag,” Longley said.

“He was a fantastic hang for me.”

“He’s a bit of a joker to some degree, like myself, so me and him was able to hit it right off. “The only unusual thing that struck me about him was his accent. That became something for me to get used to a bit.”