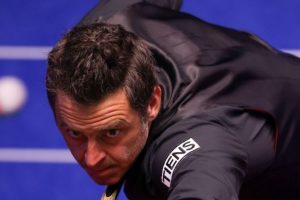 Ronnie O’Sullivan is attempting to win the eighth Masters title of his glittering career as he takes part in the tournament at London’s Alexandra Palace throughout this week. With a £250,000 cheque waiting for the winner, the Rocket certainly has plenty of motivation to try to go all the way in the competition.

Speaking ahead of his quarter-final clash with Australia’s Neil Robertson on Thursday, O’Sullivan told BBC Sport: “The way he hits the ball, Neil is a superb cueist.

“He is a phenomenal scorer. This is the Ashes, here we go. It is coming back to Britain.

“I am always nervous before any match. Some tournaments bring out the dark side in me, it was tough but I am tough and the snooker gods say calm down and play some snooker.

“It is hard to carry 2,000 Londoners – when you are from here – supporting you. The pressure was on and I felt I had to deliver, if I didn’t I would have felt bad. The fans have supported me and I have to give something back.”