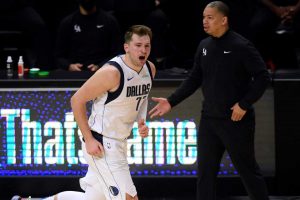 The Dallas Mavericks beat the Clippers 113-103 in Game 1 of their first-round series on Saturday at Staples Center. This happened less than a year after the Clippers failed to advance past the second round after squandering a 3-1 series lead to the Denver Nuggets.

Mavericks guard Luka Doncic finished with 31 points while shooting 11-of-24 from the field and 5-of-11 from 3-point range. Clippers star Kawhi Leonard countered with 26 points on 9-of-22 shooting. But it wasn't enough. Paul George added 23 points, but he missed his first seven shots.

Game 2 is on Tuesday at Staples Center.