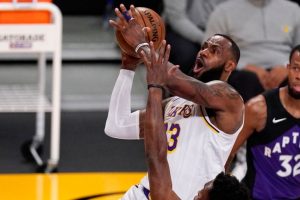 LeBron James is expected to miss back-to-back games against the LA Clippers and Portland Trail Blazers this week as he rests his injured right ankle, according to ESPN Insider Adrian Wojnarowski.

However he didn’t play the last 6 minutes, 42 seconds of the Raptors game, and then sat out Los Angeles’ win over Denver on Monday.

It has also been reported by The Athletic that Dennis Schroder could miss 10-14 days due to health and safety protocols – a two week absence would rule him out of the remainder of the Lakers games this season as they battle to secure a spot in the top six of the Western Conference.

Lakers guard Dennis Schroder is expected to miss 10-to-14 days due to health and safety protocols, sources tell me and @billoram. Schroder entered protocols on Sunday.

This season, the four-time NBA MVP is averaging 25.0 points, 7.9 rebounds and 7.8 assists per game and ESPN added that James could miss more games in order to be better prepared for the postseason.

The Lakers, who have seven games left in the regular season, have slid to sixth in the standings just one game ahead of Portland who they face on Friday night which comes 24 hours after a meeting with city rivals the Clippers in a huge week.

The Lakers have won just nine of their last 24 matches, and have failed to win back-to-back games since late March and they run the risk of sliding into the play-in competition which has been slammed by James.

The top six teams in the Western Conference qualify for the playoffs without having to compete in the play-in tournament which will be contested between the teams seeded seventh through 10th.

Want to watch even more of the NBA and WNBA but don’t have Sky Sports? Get the Sky Sports Action and Arena pack here