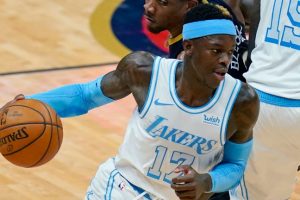 When Solomon Hill landed on LeBron James’ ankle on Saturday during the Lakers’ loss against the Atlanta Hawks, a franchise that is used to throwing its weight around came crashing down at a critical point in the season.

LA Lakers big man Anthony Davis hurt his leg last month and was ruled out for four weeks on February 18. Last week’s review suggested it would be another two weeks before he is potentially returning. Now James is down too.

In the next week, the Lakers play four games, including one each against the Philadelphia 76ers and the Milwaukee Bucks – two of the best teams in the Eastern Conference.

The first time LA played with neither James nor Davis this season was against the Sacramento Kings on March 3. The same Kings that have never really managed to rise higher than 13th in the Western Conference this year. The Lakers lost by three points.

If you remove a person from the top of a pair of stilts, the stilts fall over. That’s the thing with being top heavy: you kind of need the heavy bit for the whole thing to work.

Neither side played defense. Both had three players with more than 20 points. Each kept scoring until the clock ran out. Kyle Kuzma even had a shot to tie the game, on which he was not guarded heavily, but it fell short.

What made it worse is the Lakers did not play with Marc Gasol, and he has not played much recently. Gasol is not the two-time All-Star and former Defensive Player of the Year he once was, but that nouse on the defensive end never truly leaves a player, even if quickness and athleticism do.

The second time they played without James or Davis was on Sunday, when the Lakers lost once again. They were still without Gasol and the defense still sucked as the Phoenix Suns cruised to 111 points. The difference was on the offensive end.

Compared to the Kings game, Kuzma’s efficiency dropped through the floor. Talen Horton-Tucker picked up the slack somewhat, but they even lost the size of 10-day contract big man Damian Jones, so there were few options available to slow down the lob threat of Deandre Ayton on the Suns.

The Lakers’ Dennis Shroder played well but was outclassed by Chris Paul and Devin Booker, and Montrezl Harrell did what he could, but it was not enough.

Therein lies the issue. Even if Gasol gets fit he does not solve enough of the issues this team will face during their schedule for the next week or so. Until James or Davis return, the Lakers supporting cast face a mammoth task just to stay afloat near the top of the Western Conference.

While Lonzo Ball could be traded before the deadline, don’t think for a second this messy New Orleans Pelicans team is just giving up on this season, despite being 11th in the West.

They have now won four of their last six, including taking down the Lakers 128 – 111 on Tuesday night. This run is in large part down to the scoring prowess of Zion Williamson and Brandon Ingram, with the pair again combining for at least 60 points, as they did against the Denver Nuggets on Sunday.

The Pelicans size and physicality hurt the Lakers, who were powerless to stop the young New Orleans team getting the looks they wanted across the floor. Ingram made 14 of 21 shots, Williamson made 9 of 13, Nickeil Alexander-Walker 7 of 14, Kira Lewis 5 of 9, Jaxson Hayes 4 of 6, and Steven Adams 6 of 6 as the Pelicans shot 52.2 per cent.

For all their offensive woes, it is clear that without Davis, James and even Gasol, the Lakers are dearly missing leadership and communication on the defensive end.

The LA Lakers have potentially caught the Philadelphia 76ers at the best time, with MVP candidate Joel Embiid likely out until at least next week. The team have also been playing without sharpshooter Seth Curry in recent games.

The 76ers are now 7-6 (6-1 in March!) without their franchise big man this season, but during this extended stretch, Ben Simmons has picked up his scoring, as has Tobias Harris – who is averaging 23 points eight rebounds and four assists in the past nine games.

They have had slightly increased contributions from across the board since Embiid limped off the floor on March 12, but the team defense has remained typically stingy, allowing the seventh fewest points per game this year.

The Lakers often struggle against good defensive teams but Philadelphia also score the sixth highest number of points per game, meaning they should be well put together enough to withstand any fight a group of rudderless role players from California might put up.

Facing LeBron James’ old team since the King left has been a pretty simple siege for most teams and is probably the best chance for the LA Lakers to pick up a win in the next week.

The Cavs are young and streaky and undisciplined and fun and messy. They could completely embarrass their opponent or themselves. Such is the case when you are figuring out a direction with a young roster, but they are a team that could look very different after the trade deadline – which is when they play the Lakers.

The main dangermen are on the perimeter. Collin Sexton and Darius Garland are averaging 40 points per game together this season and they will have to be healthy to pose any threat, because LA has some decent defenders available to slow down at least one of them.

Kentavious Caldwell-Pope can be a lockdown defender for the Lakers and has proven his ability to do so to help his team win a championship, taking on Jimmy Butler. Even Dennis Schroder has the speed to keep up with the young Cavaliers, even if he has some room for improvement on that end of the floor.

The Lakers probably have enough weapons to see this one over the line with the way their rosters are currently constructed.

A team currently going off the rails, the Orlando Magic might look entirely different by the time they face the LA Lakers next week.

We can expect Nikola Vucevic to stay put but Aaron Gordon has reportedly asked for a trade, and the rumours suggest Evan Fournier and maybe others are on the move at the deadline.

Any team that has Vucevic, however, has a chance.

The Montenegrin is averaging 24 points, 11 rebounds and three assists, proving to be one of the most productive big men in the league. Without Anthony Davis, the LA Lakers will have problems slowing him down. Marc Gasol might keep Vucevic from torching the purple and gold, but he will still get his numbers.

While the Milwaukee Bucks have had some rough stretches this season as the team incorporates new players and experiments with improved defensive schemes, a six-game winning streak, and picking up 11 wins in their past 12, shows that Giannis Antetokounmpo’ team is turning things around.

Sure, the competition in the next few games is going to be a bit tougher than it has been for the Bucks, but they are meeting the LA Lakers while LeBron James’ team is weakened. Even if LeBron James or Anthony Davis if have returned by this point, the newly added defensive stalwart, PJ Tucker, will be settled just in time to slow them down.

While Antetokounmpo has not received the credit of his MVP seasons in the past two campaigns, his counting stats are arguably better than they were when he won the award, and he is a handful attacking the rim.

Much like The Greek Freak, Khris Middleton has seen his assist numbers rise this year, and it could be thanks to having a true point guard with a passing mentality on the floor with Jrue Holiday.

While Kentavious Caldwell-Pope will work hard to contain Middleton and Holiday, the Bucks were always going to be a difficult match-up for the Lakers. If James or Davis have returned, it might be unfair to give them their first defensive assignment of Middleton or Antetokounmpo, especially as the Bucks are continuing to gather momentum.

If the loss earlier this season is anything to go by, we have seen the all-offense, no-defense Sacramento Kings match-up go badly for the LA Lakers. Here’s hoping LeBron James and Anthony Davis are back in time to give their team some sense of order.

The Western Conference standings are a verifiable gauntlet this season. Ten teams are hovering around .500 basketball and the LA Lakers have the LA Clippers, Denver Nuggets and Portland Trail Blazers nipping at their heels.

Winning any games will be a challenge in this next week, but an optimist might see them going 2-3 before we know much more about the status of LeBron James and Anthony Davis.

What makes things more concerning is that the Lakers have the ninth toughest schedule left in the league this season according to Tankathon.

Without Danny and Rusty, Ocean’s 11 would have barely been able to get into the casino, but even when James and Davis return, this top-heavy team will even need the lowest heads of the totem pole to play at full strength.

Depth will be key as the playoffs approach, and getting multiple, consecutive games when one or more starters go scoreless cannot happen. Last year, the Lakers cruised to the top seed in the West and benefitted from playing a hobbled Portland Trail Blazers, an ineffective Houston Rockets and a still-growing Denver Nuggets. They then faced an injured Miami Heat team in the Finals.

There is no asterisk on the season – even in the bubble – but you can only play what is in front of you. Getting the top seed with a top heavy team means James and Davis will not need to take over every game to reach the championship.

If the Lakers lose most of their games without their leading men in this next week or so, it could impact their playoff positioning and make their return trip to the Finals that much harder.