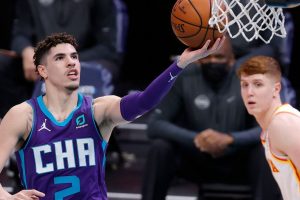 CHARLOTTE, N.C. — LaMelo Ball became the youngest player in NBA history to record a triple-double with 22 points, 12 rebounds and 11 assists, and the Charlotte Hornets beat the Atlanta Hawks 113-105 on Saturday night for their third straight win.

Ball, 19, replaced Markelle Fultz as the youngest NBA player to record a triple-double by 177 days.

Ball, the third overall pick in the 2020 NBA draft, was 9-of-13 from the field as the Hornets handed the struggling Hawks their fourth straight loss. He turned it on in the second half and established the milestone when he drove the lane and dished out to Terry Rozier for a 3-pointer.

Ball became only the fifth rookie in NBA history to record a triple-double, and he is the first Hornets player to reach that plateau coming off the bench.

He just missed the first triple-double of his career in the Hornets’ win Friday night at the New Orleans Pelicans, finishing with 12 points, 10 rebounds and 9 assists.