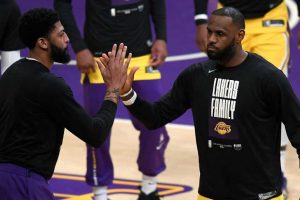 There will be a new NBA champion this season.

The Suns eliminated the Lakers on Thursday night with a 113-100 win in Game 6 of their first-round series, ending what had been an injury-plagued season for Los Angeles. LeBron James, Anthony Davis and the rest of the team will get some much-needed rest this summer, but the front office’s work is just beginning.

How will Los Angeles general manager Rob Pelinka handle the 2021 offseason and position the Lakers to be contenders again?

Let’s take a look at some of the big decisions he must make.

James and Davis are signed through at least the 2022-23 season, so the foundation is in place. As James told reporters during his Game 6 media availability, both he and Davis will have conversations with Pelinka about the supporting cast.

“I think Rob has done such a great job of constructing this team over the last few years, and he will continue to do that,” James said. “I will have some input. He always asks for my input, asks for AD’s input. But at the end of the day we want to continue to get better.”

Outside of James and Davis, only Kentavious Caldwell-Pope, Kyle Kuzma and Marc Gasol have guaranteed contracts for 2021-22. Assuming those five players remain on the roster, the Lakers would already be over $100 million in salaries.

Given that Los Angeles will be tight on cap space, Pelinka must be smart about who he re-signs and who he lets go, starting with Schroder. The 27-year-old reportedly turned down a four-year, $84 million extension offer earlier in the season, but he sure doesn’t sound like a guy who wants to leave.

Schroder is at the top of the Lakers’ list considering their lack of guard depth, but it will also be worth monitoring how they handle Caruso’s free agency. He doesn’t produce eye-popping stats, but he has been a strong contributor off the bench and is an underrated part of the team’s elite defense. Some league executives estimate that Caruso could be in line to earn “upwards of $12 million in average annual value,” per Bleacher Report’s Jake Fischer, who noted that Lakers officials believe Caruso “has an interest in staying in Los Angeles to compete alongside [James].”

As for the frontcourt, it seems that Drummond won’t just be a rental. ESPN’s Dave McMenamin indicated that the two-time All-Star is “part of the future moving forward with this franchise.” The status of Harrell is less clear. He was a key bench cog during the regular season, but he saw his minutes disappear in the first round. He may search for a better deal outside of Los Angeles.

Beyond the current roster, the Lakers will have limited options because of their financial situation. A sign-and-trade can’t be completely ruled out, but Pelinka would have to get pretty creative to land a real difference-maker.

As a result of the Davis trade, the Lakers owe the Pelicans their 2022 and 2024 first-round picks. New Orleans also has the rights to swap first-round picks with Los Angeles in 2023 and 2025.

But hey, at least the Lakers get to do what they want with their selection this year. If Pelinka doesn’t package the No. 22 overall pick as part of a trade, here are a few possibilities based on recent mock drafts:

Dosunmu could be a solid addition to the team if he is still on the board when the Lakers are on the clock. The Illinois star is an older prospect who fills a need at guard and could slide in nicely alongside James and Davis.