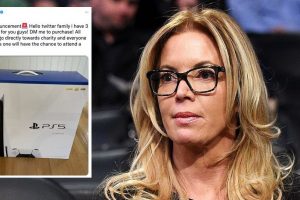 Los Angeles Lakers owner Jeanie Buss has her hands full with sorting out her team ahead of the new NBA season, but now she has another headache in the form of her twitter account being hacked. The 60-year-old’s profile boasts over 425,000 followers, and those followers were given a surprise when an uncharastic tweet regarding a Playstation 5 giveaway appeared on the page.

“Huge Announcement. Hello twitter family i have 3 #PS5 For sale for you guys! DM me to purchase!”, it read. “All proceeds will go directly towards charity and everyone that purchases one will have the chance to attend a lakers game.”

Just two hours after that tweet was posted, using Buss’ position as Lakers chairman, another one was added with an extra incentive to purchase the final console. “Got 1 more #PS5 Left last Person that purchases it will get flown out to personally have lunch with the #Lakers Family!,” the enthusiastic message read. As of writing, the tweets have yet to be deleted.

Fans commented on the bizarre post, with user @CookedbySteph referencing the Lakers’ struggles last season. “Lakers are such a mess even the owner of the team got hacked,” they wrote, while Lakers fan page @LakersGlobal warned: “ Hacked, do not engage.”

User @Toronto_Roadman then joked: “Them Lakers pulling all the stops to keep Lebron,” while @BigTG559 said: “Co-owner of the most recognisable NBA franchise and she gets her s**t hacked by a scammer selling PS5’s.”

Before her days as an NBA team owner, Buss decided to pose nude in "Playboy" in May 1995. When she opted to participate in the photoshoot 27 years ago, Buss achieved a personal goal.

"When I posed, I was 32 years old," Buss said. "It wasn't like I was making a mistake that I didn't know what I was getting myself into. For me, I was at the maturity level that I could do it. And I was like every other model, I had to go through the test photo shoot and all that kind of stuff. It was my own personal goal, not anything to do with business or anything. Just something I wanted to do."

Now in her sixties, she says even almost three decades later, she still has to defend her decision to feature in the magazine. “I’m still explaining it 20 years later," she said. “They want to judge and put me in a category.”

She also credited her late father and former Lakers owner Jerry for how he handled her decision to do the shoot.

"My dad is again one of the most brilliant people," she said. "He gave a quote that was so perfect, where he said, 'It will be the first issue of Playboy magazine I've never read.'

"Meaning, he's endorsing the magazine, but I'm his daughter, right. He can walk that fine line of not being judgmental or putting me down."