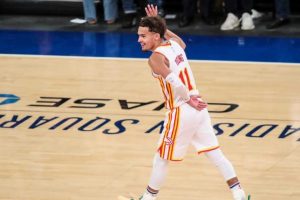 Spike Lee had seen enough. He didn’t want to stay and watch Hawks star Trae Young stomp all over the Knicks’ gravesite.

In Wednesday’s 103-89 win, Young poured in 36 points and dished out nine assists, closing out what had been a heated (but lopsided) series between New York and Atlanta. The writing was on the wall in the fourth quarter, as the Knicks simply couldn’t cut down the Hawks’ lead and give them a real challenge.

So, Spike decided to bail. With a little more than three minutes left on the clock and New York trailing by 16 points, the Knicks’ biggest superfan walked down the closest Madison Square Garden tunnel.

“Come on, man. That’s a fair-weather fan right there,” said analyst Reggie Miller, who has a, uh, history with Lee. “If he’s supposed to be the No. 1 supporter of the Knicks, you gotta stay here and take it like the guys on the floor. Come on, man.”

It’s unclear if Lee returned to his seat, but heading to the parking lot would have been a good call because Young had one last dagger to throw. As New Yorkers gave their beloved Knicks a standing ovation in the closing seconds, Young launched one more 3-pointer, then took a bow after it splashed through the bottom of the net.

“I know where we are,” Young said after the win. “I know [there are] a bunch of shows around this city. And I know what they do when the show is over. So, that’s pretty much what it was.”