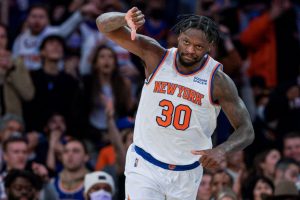 GREENBURGH, N.Y. — New York Knicks star Julius Randle had no interest in talking any further about his decision to tell Madison Square Garden fans to “shut the f— up” last week.

“I’ve already addressed it,” Randle said Tuesday afternoon, when asked where he hopes his relationship with the fans will go from here in the wake of giving the crowd at MSG a thumbs-down gesture during last Thursday’s win over the Boston Celtics, later saying the message from that was to “shut the f— up” and then apologizing in a lengthy Instagram post Friday.

When asked if he’d talked to Knicks management about what took place, or if he was surprised by the backlash, Randle repeated: “I’ve already addressed it.”

Randle also had a one word answer — “None” — when asked if he had a reaction to being fined $25,000 by the NBA for what it said was “egregious use of profane language during media interviews.”

Randle briefly expanded upon what happened last week when he was asked what went into his decision to apologize.

“Just felt like I needed to address certain stuff that was said, whatever it was,” Randle said.

Throughout his media session Tuesday, which lasted just under five minutes and came after the team watched film at its Westchester practice facility, Randle — who met with reporters for the first time since his postgame comments following that win over the Celtics — mostly gave short, terse answers, just as he did following Thursday’s win.

All of this came in the wake of the latest twist in this tale Monday night, when Randle and the Knicks played at home for the first time since Thursday’s events. And while the Knicks cruised to a comfortable win over the San Antonio Spurs, Randle finished with two points — his lowest total as a Knick — and was booed at various times throughout the game.

It added an extra layer of strangeness to what has already been a quixotic season for New York, which has followed up its fourth-place finish in the Eastern Conference last season with a tie for 10th entering Wednesday’s game against Luka Doncic and the Dallas Mavericks (7:30 p.m. ET on ESPN)

“I think on a normal day it would affect anybody,” Knicks veteran Taj Gibson said, when asked whether everything that’s going on is affecting Randle. “Going to a popular stadium, Madison Square Garden, one of the best places to play, one of the No. 1 fan bases in the world, you’re gonna have pressure. That’s why he chose to come here. …

“A lot of guys deal with it. It’s part of New York. You play good, they’re gonna love you. You play bad, you’re gonna hear about it. But it’s just a chip on your shoulder, and you just gotta move on.”

It was a similar message from Knicks coach Tom Thibodeau, who echoed comments he made after Monday’s win that the best thing for all involved would be for Randle to move forward.

“Listen, we’re a team,” Thibodeau said. “We all talk to each other. That’s important. But the most important thing are the actions. You can say all the right things, and do none of them. The important thing is putting the work in, getting ready to play, sacrifice for the team, put the team first.

“We know we have a very passionate fan base, and we appreciate it. We love it. The building is full, there is no other building like it in the NBA, it’s the best place to play, we appreciate them. I’ve seen them go crazy over Julius, and this is all part of it. They are passionate. So whether it’s praise or criticism, it doesn’t matter. I love that they’re passionate about their team. Julius is passionate about the city, our fans, the game, winning, and that’s all that matters. Come in every day, keep moving forward.”

The Knicks have made it clear they’re supporting Randle, and Gibson, who grew up in Brooklyn and knows a thing or two about basketball in New York, said Randle’s teammates are there for him, and that, ultimately, this will pass.

“We all stick together,” Gibson said. “It’s not just one guy trying to get over to him. But one thing about Julius, one thing first about our team, we got a great group of young guys. Sometimes we overlook the age gap, or our young guys just because of how professionally they all carry themselves. They’re still relatively young guys, so you’re still figuring out how to deal with certain things, this little bit of adversity. …

“Everybody just gets a little annoyed sometimes. But he’s a great kid.”