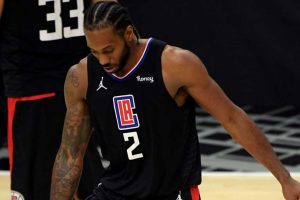 Kawhi Leonard has reportedly declined his third-year, $36 million option with the Clippers, per a report from Yahoo! Sports’ Chris Haynes and Ben Rohrbach.

With the move, Leonard becomes an unrestricted free agent — but that doesn’t mean his stint in L.A. is over. According to Haynes and Rohrbach, the expectation is for the Clippers and Leonard to reach a new deal that will continue to keep him with the team. Per Yahoo! Sports:

“Clippers owner Steve Ballmer will pay whatever it takes to keep Leonard, considering the investment the multi-billionaire made to pair Leonard with fellow perennial All-Star Paul George just two summers ago.”

Leonard’s stint with the Clippers has fallen far short of the expectations that come with superteams: L.A. blew a 3-1 series lead in the 2020 Western Conference semifinals to the Nuggets, Leonard’s first year with the team. They made it to the 2021 conference finals a year later, but fell in seven games to NBA Finals runner-up Phoenix. Leonard, coming off a surgery to repair a partially torn ACL, did not play in the Clippers’ final two games of the 2021 Western Conference semis and missed the entirety of the conference finals.

The two-time NBA Finals MVP is now eligible to earn 35 percent of the team’s salary cap — $39 million — making it an easy decision for him to decline his third-year option. He’s also eligible for a four-year, $175 million dollar deal. If he were to sign a one-year deal and enter free agency again next year, he could command a five-year, $250 million deal with L.A., which would then own his Bird Rights.

Leonard has averaged 26 points of 48.8 field goal percentage, 6.8 rebounds and five assists per game through his first two years in L.A.