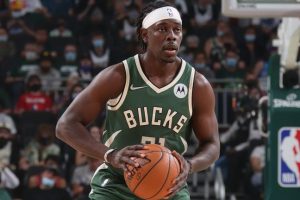 Jrue Holiday hit a go-ahead driving layup with 11.4 seconds remaining and the Milwaukee Bucks tightened the defensive screws on the visiting Brooklyn Nets for an 86-83 victory in Game 3 of their Eastern Conference semi-final playoff series on Thursday night.

Game 4 is scheduled for Sunday evening in Milwaukee and is free to watch live on Sky Sports’ YouTube channel.

After allowing 115 and 125 points in the first two games of the series in Brooklyn, the Bucks limited the Nets to 36.2 per cent shooting yet still trailed 83-80 after a Durant three-pointer with 1:23 to go.

However, the Nets never scored again.

Middleton got the Bucks within 83-82 on a layup with 1:17 to play, setting up Holiday’s difference-maker.

The Nets had subsequent chances to go ahead and tie, but Bruce Brown missed a short shot with 6.4 seconds left. After Middleton added a pair of free throws to increase the Milwaukee lead to three, Durant misfired on a desperation three-point attempt at the buzzer.

Holiday finished with nine points as the third-leading scorer for the Bucks, who were coming off a 125-86 shellacking in Game 2.

The Bucks won despite hitting just 6 of 31 three-point attempts (19.4 per cent), as they benefitted from limiting the Nets to 8 of 32 (25 per cent) from long range.

Brown complemented Durant and Irving for Brooklyn with 16 points and 11 rebounds. Durant also had 11 boards.

Inspired by the threat of falling behind 3-0 in the series, the Bucks dominated on both ends of the court early on, scoring the first nine points of the game. Antetokounmpo had seven of the nine, including a pair of dunks.

Milwaukee led 30-9 in the final minute of the period before Brooklyn began a comeback, getting within 45-42 by half-time. The Nets drew even for the first time at 57-all on a three-pointer by Durant with 5:02 remaining in the third period.

Both teams’ benches were unable to get going, with Brooklyn’s outscoring Milwaukee’s 7-6.

The Nets again played without star guard James Harden, who is still nursing a tight right hamstring he sustained less than a minute into Game 1 of the series.