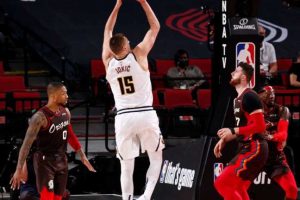 The Denver Nuggets have grown quite accustomed to playing seven game series. But for once they didn’t need to go the distance, instead closing out the Portland Trail Blazers in six with a 126-115 win on Thursday.

“I love our team. I love every player in that locker room, one through seventeen,” Nuggets coach Michael Malone said. “We continue to find ways to win. Last year, this year, people don’t realize what we’re missing right now with injuries so I couldn’t be more proud of a group of players that I truly love coaching every single day.”

The Nuggets did it on the road, avoiding any clutch-time magic from Damian Lillard by holding the Blazers to just 14 points in the fourth quarter. The Nuggets felt the urgency coming into the game to get it done sooner than later, knowing they lost a Game 7 on their home floor to the Blazers two seasons ago.

“Nobody is trying to see Damian Lillard, one of the clutchest players ever, in a Game 7,” Nuggets forward Michael Porter Jr. said.

It’s been a remarkable run for the Nuggets, finding answers in unlikely places at every turn as they’ve navigated the last few months without two of their best players, Jamal Murray and Will Barton, who are both out injured. They of course have leaned on the presumptive MVP, Nikola Jokic, who was brilliant once again in sparking a 14-point comeback in the second half with 20 of his 36 points coming in the third quarter.

“That’s why he’s the clear cut MVP,” Malone said. “Because you can take anybody away from our team, if we have Nikola, you could put me, Wes Unseld, Ryan Bowen, Charles Klask, whoever you want out there, we’re going to find a way to compete because that’s how great he is.”

Asked how the Nuggets made up the second half deficit, Porter Jr. offered a simple explanation: “Getting stops and Nikola Jokic,” he said.

But it’s also been the role players, along with the rise of Porter Jr., that have buoyed the Nuggets. Porter Jr. set the tone early, scoring 22 points in an electric first quarter as Jokic dealt with foul trouble. Once Jokic settled in during the third quarter, the Nuggets got big shots and big plays from Monte Morris (22 points and 9 assists), Austin Rivers, Aaron Gordon and JaMychal Green.

Jokic is the fulcrum, though, and became only the second player ever (Dirk Nowitzki in 2002 the other) to average 30 points and 10 rebounds on 50% shooting and 40% from 3 in a playoff series. And he got his 36 in Game 6 despite not scoring in the first quarter.

“The first quarter, I was not even that aggressive. I didn’t want to force it,” Jokic said. “Like why [try] to force when I have a really good scorer going? So why would I maybe make him cold or whatever, make him angry, so I can sacrifice myself a couple minutes or a quarter.”

Jokic and Lillard dueled throughout the series, with both putting together historic performances. But in Game 6, Jokic outscored Lillard 27-9 in the second half as the series slipped away from Portland. Lillard already endorsed Jokic for MVP multiple times, and reiterated his take after Game 6, but even took it so far to say he thinks Jokic is the caliber of star that could lead Denver all the way to the mountaintop this season.

“He’s everything for them,” Lillard said of Jokic. “I think if it was any year a guy like him, what he does for that team, could lead his team to a championship, it would be this year because of how open it is. There’s no favorite. In my eyes at least, I feel like anybody can get beat and anybody can go get it done. That’s why it’s even more disappointing for me because I felt like if there’s any year you can shoulder the load and go get one, it was this one. I definitely think he’s capable of it.”

The Nuggets move on from the first round for a third consecutive season, and will take on the second-seed Phoenix Suns in the second round. But after a run to the Western Conference finals a year ago in the bubble, the Nuggets aren’t content with just conquering Lillard and the Blazers.

“I just told our team this, hell of a win to come in here and win a Game 6 on the road is great. But we’re not satisfied, Malone said. “Our goal coming into the season was not to get out of the first round. We have much bigger goals.”