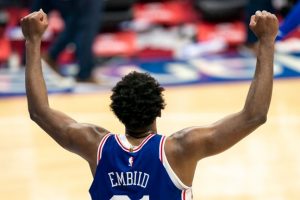 Joel Embiid scored 35 of his 45 points in the second half and overtime to help the Philadelphia 76ers outlast the Miami Heat on Tuesday.

Embiid delivered for the 76ers producing 13 of 13 from the free-throw line, including two with 8.9 seconds left in overtime. He added 16 rebounds, five steals and four assists to his day’s work as the Sixers ended a three-game losing streak.

Meanwhile, the Brooklyn Nets overcame an 18-point deficit to prevail over the Denver Nuggets and the Utah Jazz kept a second straight opponent under 90 points.

LeBron James scored 22 of his game-high 26 points in the first half and the Los Angeles Lakers posted their second runaway victory over the Houston Rockets in as many games.

Joel Embiid’s strong performance, particularly during second half and overtime, helped the Philadelphia 76ers secure their positive result against the Miami Heat.

Embiid was 13 of 13 from the free-throw line, including two with 8.9 seconds left in overtime, to go along with 16 rebounds, five steals and four assists.

Danny Green tied a franchise record with nine 3-pointers on his way to 29 points, and he added 10 rebounds. Mike Scott and Tyrese Maxey added 16 points apiece.

The Sixers played without a number of key players, including Tobias Harris, Seth Curry, Shake Milton and Matisse Thybulle, due to health and safety protocols.

Miami held a 132-131 lead in overtime with 44.8 seconds left after Achiuwa scored. Andre Iguodala later had a chance to send the game into a second overtime, but his corner 3-pointer wasn’t close.

Kevin Durant totaled 34 points, 13 assists and nine rebounds as the Brooklyn Nets overcame an 18-point deficit and posted a 122-116 victory over the Denver Nuggets.

Durant shot 12-for-18 from the floor overall. He scored 14 points in the third quarter, when the Nets erased a 79-61 lead in the final nine-plus minutes.

He secured Brooklyn’s biggest comeback of the season by hitting a short shot with 1:14 remaining in the game and a 3-pointer to give the Nets a 120-113 lead with 27.9 seconds to go.

Caris LeVert added 20 points and Bruce Brown contributed six of his 16 points in the fourth quarter, including a baseline 10-footer that snapped a 113-113 deadlock with 1:44 left. Joe Harris contributed 15 points for the Nets, who shot 60.8 percent in their fourth straight game without Kyrie Irving (personal reasons).

Nikola Jokic amassed 23 points, 11 assists, eight rebounds and seven steals for the Nuggets, who were outscored 61-37 in the final 21-plus minutes.

Donovan Mitchell scored 27 points and Jordan Clarkson added 21 to lift the visiting Utah Jazz to victory over the Cleveland Cavaliers.

Bojan Bogdanovic chipped in 20 points for the Jazz. Georges Niang added 14 points off the bench after scoring 13 total points in his first 10 games of the season. Mike Conley contributed 12 points, six rebounds and five assists.

Utah made 24 3-pointers and shot 53.3 percent from the perimeter en route to its third straight victory, all on the road. The Jazz held a second straight opponent under 90 points.

The Cavaliers were missing eight players, seven of them due to injuries. Cedi Osman had 17 points, four rebounds and six assists but the result means that Cleveland have lost three on the spin and they have dropped seven of nine going back to December 29.

LeBron James scored 22 of his game-high 26 points in the first half and the Los Angeles Lakers posted their second runaway victory over the Houston Rockets in as many games.

The Lakers, who led by as many as 27 points in their 120-102 win on Sunday, matched that advantage on a Kentavious Caldwell-Pope 3-pointer at the 3:35 mark of the second quarter.

The Lakers combined stingy defense with blistering perimeter shooting in the first quarter to build a 35-14 lead entering the second.

Lonnie Walker IV scored 24 points to lead the San Antonio Spurs to a 112-102 win over the host Oklahoma City Thunder.

It was the second consecutive big scoring game for Walker, who picked up some of the scoring vacated by the absence of DeMar DeRozan at the end of San Antonio’s road trip. DeRozan missed his second consecutive game for personal reasons, caring for his father.

Walker has had two of his top three scoring games in the past two, as he scored 25 on Sunday in the Thunder’s loss at Minnesota.

Against the Thunder, Walker and Dejounte Murray each scored 10 in the fourth quarter to help the Spurs hold on.

The Spurs used defense to fuel their offense. San Antonio forced 13 Thunder turnovers, converting them into 26 points on the other end while Oklahoma City managed just two points off four Spurs turnovers.

Myles Turner’s third 3-pointer of the game broke a late tie and the Indiana Pacers went on to defeat the Golden State Warriors.

Playing the second night of a back-to-back set, Indiana snapped a two-game losing streak by outfinishing the Warriors in a fourth quarter that featured six ties and three lead changes.

Golden State, which was riding a two-game winning streak on the final night of a seven-game homestand, scored only five points after a Stephen Curry hoop gave the hosts a 90-88 advantage with 5:05 to play.

Indiana’s Aaron Holiday produced the last tie at 90-all on a driving layup with 3:37 to go, after which Turner bombed in a 27-footer for a lead the visitors never relinquished.

Want to watch even more of the NBA and WNBA but don’t have Sky Sports? Get the Sky Sports Action and Arena pack, click here