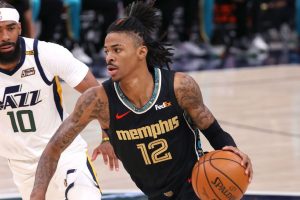 The Jazz banned three fans indefinitely from Vivint Arena last week after Ja Morant’s parents were the targets of separate racist or vulgar comments during Game 2.

“It was a nice gesture from the Jazz,” Tee Morant said by phone. “It was unfortunate. It was just a few fans — most of them were great and cheering right alongside with us.”

The group of five will not include Ja’s mother, Jamie, according to Tee Morant. She will watch the game at the family’s home near Memphis. The Grizzlies trail the series 3-1.

“She said her anxiety couldn’t take it,” Tee Morant said, citing the stress created by the harassment during Game 2.

Smith, who is in his first season as the Jazz’s owner, reached out to the Morants to make the offer before the Western Conference first-round series returned to Salt Lake City. Smith publicly apologized to the Morant family on Thursday night after Tee Morant revealed details of the incidents to ESPN.

“Memphis Grizzlies and Morant family… we are embarrassed and sorry,” Smith tweeted. “The @utahjazz have zero tolerance for offensive behavior. We are committed to creating a respectful, competitive environment.”

Several other members of the Jazz organization, including coach Quin Snyder and All-Star guard Donovan Mitchell, also publicly apologized to the Morant family in the wake of Game 2. Dwyane Wade, the former NBA superstar who became a minority owner of the Jazz in April, emphasized the importance of addressing such inappropriate behavior.

“If we turn our backs on this kind of behavior we’re all a part of the problem,” Wade tweeted. “This will not be tolerated! Apologies once again to Ja and his family.”