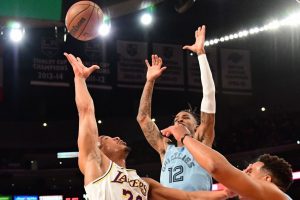 Near the midway point of the first quarter, with Memphis out to an early 12-9 lead, Bradley deflected a Morant pass and corralled the steal out past half court, sparking a fast-break opportunity for himself to finish on the other end.

Only Morant had other plans.

The third-year guard sprinted back on defense and caught up to Bradley from behind, leaping from beyond the restricted zone to nab Bradley’s layup attempt with both hands while the ball was still on the way up.

Morant’s head was near the rim as he controlled the ball’s trajectory by the top of the square on the backboard, and he collected the ball once back on the court to spark a Grizzlies fast break toward the other basket.

“Obviously, it starts with timing and also just stalking your prey,” said LeBron James, who had the most significant chase-down block in league history in the closing minutes of Game 7 of the 2016 NBA Finals. “And that’s exactly what Ja was doing that whole play, and I saw it happening.

“Didn’t know he was going to do it in that fashion, but he got rockets in his calf muscles, and it was a spectacular play. It was a great play. Salute.”

Morant, who sat out the Grizzlies’ win over the LA Clippers on Saturday with soreness in his left thigh, looked mighty fine on Sunday. He finished with 16 points, seven assists, five rebounds and, of course, that block.

“I just got back and made an incredible play,” Morant said. “I was just trying to gather the ball. Most of the time on a break like that, if you block it, they might have a player trailing to get the ball and lay it up. It worked out perfect for me.

“Now I’m probably all over the internet for it.”

It was just another memorable moment in the personal highlight reel that Morant has had against the Lakers this season after dropping 40 points in each of the teams’ first two meetings.

And it helped the Grizzlies to their ninth straight win, drawing them within one game of the Utah Jazz for the No. 3 spot in the Western Conference standings.

“That was a special play from a special player,” Lakers coach Frank Vogel said. “I don’t know what else there really is to say about it.”