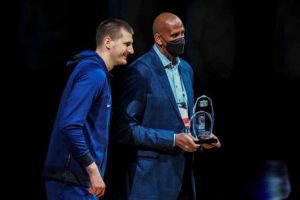 JaMychal Green may have been the tip of the iceberg.

When new Nuggets decision-maker Calvin Booth flipped Green’s $8.2 million contract and a protected 2027 first-round pick for No. 30 in this year’s draft and two future second-round picks to Oklahoma City, it was just the start of one of the most consequential summers in Nuggets history.

Look closely at what Booth told reporters less than two weeks ago, speaking publicly for the first time since assuming the mantle from former team president Tim Connelly.

“When we talk about Nikola (Jokic), the MVP of the league, I’m the steward … of his peak years,” Booth said. “You want to optimize those and take advantage of those. I don’t feel the pressure. I’m excited for the opportunity. I want to be able to help him in the way he’s helped our organization and everybody in it.”

In Green, Booth took a player who underperformed last season (6.4 points per game on a career-low 26% from the 3-point line) and turned him into an immediate asset (another first-round pick) for a bill that will come due five years from now. The Nuggets also created an $8.2 million traded player exception to possibly use, along with their $6.4 million taxpayer midlevel exception.

When Booth talked about maximizing Jokic’s prime years, that meant identifying redundancies in the roster and working to optimize the players around him. Jeff Green, who appears likely to pick up his $4.5 million player option in the wake of the trade, was a cheaper and more reliable player, anyway. Booth likely isn’t dealing away one veteran power forward unless he’s confident the other one will stay.

Less than a week away from the June 23 draft, the Nuggets now have two first-round picks to dangle in trades should Booth want to forgo youth for contention. And based on his prior comments, it’s tough to see how drafting two rookies would yield any immediate benefit to Jokic, who’s set to sign a five-year, supermax deal this summer.

Outside of the picks, Booth also has to consider roster construction in terms of the depth chart, age, contract length and relative compensation. And when he does that, he’ll no doubt reach some hard truths.

Who’s the most valuable contract, to the Nuggets and to other teams? Where do the Nuggets have the most depth? Are there players whose defensive limitations would make them a liability if Denver advanced to the Finals? Internally, numerous front-office officials have reached the same deduction: Denver isn’t good enough defensively.

That means change is likely coming. Once Jamal Murray returns next season, Denver will have three capable point guards in Murray, Monte Morris and Bones Hyland. Morris, according to a league source, has generated significant trade interest and is among the most coveted players on the Nuggets.

With two years and $19 million left on his deal, Morris represents excellent value. He’s also proven himself to be a capable playoff performer — an invaluable attribute when assessing long-term staying power alongside Jokic.

Hyland, on the other hand, is entering just the second year of his rookie deal. Given what he did last year in seizing the backup point guard role before being named second-team All-Rookie, Hyland might have the most untapped potential. As such, a team in need of a young, electric point guard might be willing to return a coveted wing the Nuggets desperately need.

And then there’s Will Barton, whose defensive lapses might be a non-starter as Booth looks to outfit the roster with two-way players. The Nuggets have maintained they’ll be aggressive, and the draft, the summer’s first inflection point, is nearly here. Buckle up.