Ja Morants block of the year candidate, absurd dunk had the internet buzzing 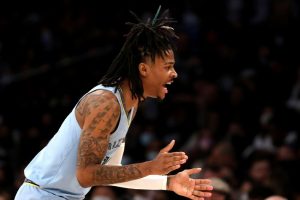 Tory Barron is a Bristol-based writer and editor for ESPN.com. After retiring from playing lacrosse at UConn, the DC native decided to try her hand at writing about people playing sports.

As if Klay Thompson returning to the Golden State Warriors’ lineup after 941 days wasn’t enough excitement for one night, Ja Morant had to go and hit his elbow on the backboard as the Memphis Grizzlies earned a franchise-record ninth straight win on Sunday.

The Grizzlies star took flight during the first quarter of a 127-119 win over the Los Angeles Lakers, chasing down point guard Avery Bradley — and making us acutely aware of our lack of athletic abilities — with an absolutely absurd two-handed block.

To put it mildly, Morant’s got ups.

Before we could process what the heck we had just witnessed, the 22-year-old had to go and throw down this dunk.

A block of the year candidate followed up with a slam worthy of the dunk contest? Yeah, this Ja guy is different.

The sports world was equally as impressed by Morant’s otherworldly efforts.