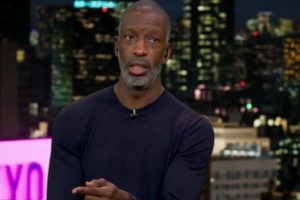 Former Olympic star Michael Johnson delivered a scathing review of Team USA’s performance during the men’s 100m relay and said he “absolutely” agreed with Carl Lewis who called them an “embarrassment”. Team USA has a history of underperforming during the Olympics men’s relay with critics slamming their passing techniques and line-up. Mr Johnson added to the list saying it was “shocking” that American athletes still have not ironed out their problems as they have not won 4x100m gold since 2000 despite winning several world championships.

Trayvon Bromell, Fred Kerley, Ronnie Baker and Cravon Gillespie were sixth in their heat with a time of 38.10 seconds.

The team were shut out of the final as the athletes struggled to pass the baton and line up correctly.

After the performance, Carl Lewis attacked the team on Twitter.

He wrote: “The USA team did everything wrong in the men’s relay. The passing system is wrong, athletes running the wrong legs, and it was clear that there was no leadership.

“It was a total embarrassment, and completely unacceptable for a USA team to look worse than the AAU kids I saw.”

Mr Johnson was asked if he agreed with Mr Lewis to which he immediately replied: “Absolutely.