If Brooklyn gets Blake Griffin the NBA championship race is over 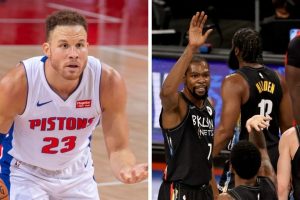 Blake Griffin is a free agent after agreeing to a contract buyout with the Detroit Pistons and is favoured to join the Brooklyn Nets — and that might be all she wrote for this year’s NBA season.

The Nets already look like the most unstoppable team in the league after adding former MVP James Harden to its superstar tandem of Kevin Durant and Kyrie Irving and securing Griffin just adds to their embarrassment of riches.

The rest of the NBA is beginning to look as helpless as it did during Golden State’s reign a few years ago — their only hope of stopping the Nets is someone getting injured.

Griffin certainly isn’t the dominant force he was during his days with the LA Clippers and likely won’t help the Nets solve their only weakness — defence.

His signing might end up being a repeat of what we saw when DeMarcus Cousins joined Durant, Steph Curry, Klay Thompson and Draymond Green at the Warriors, lots of excitement and bold declarations of dominance but in reality not a real game-changer.

But even continuing to average the career-low 12.3 points and 5.2 rebounds a game he’s produced in the first 20 games of this season will help and adding another veteran to a supporting cast led by sharpshooter Joe Harris is more than handy.

The Blake Show is heading to Brooklyn. (Photo by Dave Reginek/Getty Images)Source:Getty Images

By joining Brooklyn, Griffin would be declaring his hand about who he thinks has the best chance of winning this year’s championship because both the Lakers and Clippers — who began the season with the shortest odds — have expressed interest in him too.

Shams Charania of The Athletic tweeted the Nets are “believed to be (the) leaders”, adding “rival teams with interest are expecting Griffin to choose (Brooklyn) as a title favourite for chance to win a championship”.

The Heat and Warriors are also on the list of potential suitors, according to the New York Times.

Griffin, 31, hasn’t played since February 12 while the Pistons attempted to trade him before the March 25 deadline, but they found no takers due to the remainder of his $36.6 million salary for this season and the $39 million he’s owed for 2021-22.

The Nets have won 10 of their last 11 games to enter the All-Star break with the second-best record in the Eastern Conference (24-13), a half-game behind Philadelphia.

Durant has missed the past nine games with a hamstring injury, and Steve Nash mostly has employed a smaller line-up with Bruce Brown playing power forward.

Durant will sit out Sunday’s All-Star Game, but the Nets still will be represented by guards Irving and Harden.

After Griffin clears waivers on Monday, the Nets could use their mid-level exception (around $5.6 million) to sign him as frontcourt depth behind Durant and DeAndre Jordan, a former teammate with the Clippers. Griffin also worked out with Durant over the summer in Los Angeles.

Griffin was dealt by the Clippers to Detroit in 2018, during the first season of a five-year extension worth $171 million.