How to build a star-powered Olympic team in three steps 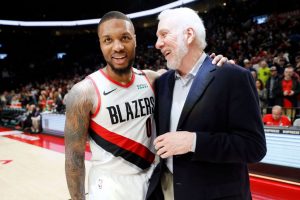 Many players and coaches vowed to never do it again.

The Orlando, Florida, bubble erected last summer and fall was mentally taxing, lonely and seemingly endless — which put USA Basketball in a challenging position. As they set to construct a roster over the past two months, the rules outlined for the Tokyo Olympics were revealed to be almost as restrictive as the restarted 2019-20 NBA season: no family or friends, confinement mostly to housing areas when not practicing or playing, no restaurants or night life. The International Olympic Committee would also be testing for recreational drugs like marijuana, which the NBA had abandoned.

Despite all of that, despite another abbreviated offseason, Team USA is loaded with All-Stars who pledged commitment for six weeks.

“Life,” Colangelo said, “is about relationships.”

Sometimes it’s about mending relationships. One of the first players to commit was Portland Trail Blazers guard Damian Lillard, who let go of old scar tissue. Lillard is still bitter about what happened in 2014 when he was the final cut before Team USA went to Spain for the World Cup, sources said.

Lillard felt he had secured a spot on the roster that year after talking to then-head coach Mike Krzyzewski, but the team pivoted and kept an extra center. The Blazers’ star said all the right things publicly, but the decision burned him for years. It played a part when he backed out of competing for the 2016 Olympic team, sources said, though he was also dealing with plantar fasciitis at the time.

With a new coach to play for, Popovich, and knowing this could be a last chance at the Olympics, Lillard played an important role in gaining momentum toward building out the roster.