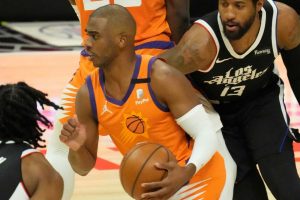 LOS ANGELES — With the same candor that he often uses toward teammates and officials, Phoenix Suns guard Chris Paul spoke bluntly and critically about his own play.

In his first game after being sidelined for eight days because of the NBA’s health and safety protocols, Paul labored through the Suns’ Game 3 loss to the Los Angeles Clippers with 15 points while shooting 5-of-19 from the field and 2-of-7 from 3-point range.

Despite his frustrations, Paul maintained perspective about his unfortunate circumstances.

What did Paul make of testing positive for the coronavirus despite already receiving the COVID-19 vaccine? "(Expletive) happens," he said.

What did Paul think of his conditioning and health in 39 minutes after missing the Suns’ Game 1 and 2 wins? "I was good; I’ll feel even better the next game," he said.

How Paul has kept this outlook partly traces back to his varying experiences during his 16-year NBA career. His eventual Hall of Fame induction might center on his standing on the NBA’s all-time assists list (currently fifth with 10,275). Or his competitiveness that entails demanding more out of his teammates, challenging officials and outsmarting opponents. But throughout Paul’s journey with the former New Orleans Hornets (2005-11), the Clippers (2011-17), Houston (2017-19) and Oklahoma City (2019-20), he experienced five first-round exits and five losses in the second round, many because of various injuries.

Paul conceded he "absolutely" has progressed with handling adversity because of those experiences. Consider how Paul views his current circumstances in only his second appearance in the Western Conference finals.

"Things could be a lot worse," Paul said. "I'm here now, got an unbelievable team in Phoenix and I've got the best support system you could absolutely have. So ain't nobody over here feeling sorry. Whatever happened is in the past, and you move on."

Paul has experienced plenty of moments that required a short memory.

Paul committed two late turnovers that contributed to the Thunder overcoming a 15-point deficit in Game 5 of the 2014 conference semifinals, the same year the Clippers survived a seven-game first-round series over Golden State while handling the fallout over former owner Donald Sterling making racist statements on an audio tape. Though he played through an injured hamstring before making a game-winning shot in Game 7 of the Clippers’ first-round series against San Antonio in 2015, Paul missed two games the following series before the Clippers squandered a 3-1 series lead to Houston.

In 2016, the Clippers lost in the first round to Portland in six games after Paul (fractured right hand) and Blake Griffin (left quad) suffered injuries in Game 4. Paul stayed healthy in 2017, but the Clippers lost to Utah in the first round amid Griffin suffering a right toe injury in Game 3. Shortly afterwards, Paul agreed for the Clippers to deal him to Houston in a sign-and-trade in hopes of winning an NBA title with James Harden. But Paul’s health and the Warriors’ dominance torpedoed those plans. Paul missed Games 6 and 7 of the 2018 Western Conference finals after straining his right hamstring in Game 5. The following season, Paul missed 17 games with a strained left hamstring and looked limited in the playoffs before the Warriors beat the Rockets in the second round. The Rockets then dealt him to Oklahoma City for Russell Westbrook.