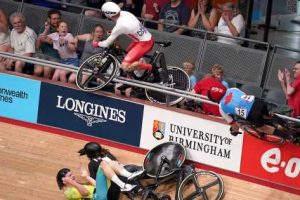 A Commonwealth Games fan was left covered in blood after a horror crash at the cycling.

England star Matt Walls smashed into the crowd following a collision during the final lap in the men’s 15km scratch race qualifying. Medical teams immediately rushed onto the track, though it wasn't just the cyclists involved that needed attention.

A spectator was taken away in a wheelchair covered in blood while the BBC add screens were put up around the area in which Walls, who was preparing to leave in an ambulance while wearing an oxygen mask, received treatment. A young girl was also reportedly being seen by medics for a cut on her arm.

Fellow rider Matt Bostock of the Isle of Man had to be taken away on a stretcher with the rest of the session at the velodrome abandoned.

England's race team tweeted: "Thoughts are with all the riders involved in the crash in the velodrome."

While Scottish Cycling added: "Unfortunately we have just witnessed another big crash at the velodrome. Kyle Gordon was taken down but thankfully got up and got back on this bike. "Our thoughts with the two riders who are receiving medical attention."

The cycling at this year's Commonwealth Games is being held at the Lee Valley VeloPark in London despite Birmingham being the host of the event. And this crash follows another incident earlier in the weekend when England's Joe Truman was involved in a nightmare crash at 45mph during the Keirin semi-finals.

The cycling prospect was knocked unconscious and immediately sent to hospital after a crash with Australia's Matthew Glaetzer sent the Briton flying.