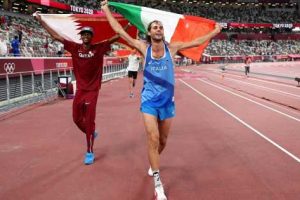 High jumping heroes Mutaz Essa Barshim and Gianmarco Tamberi were told they couldn't have a lap of honour after the pair shared the gold medal on Sunday.

Barshim and Tamberi were both cleared 2.37 meters in a tense high jump final without any failed attempts.

However, neither man could clear 2.39, which would have equalled the Olympic record.

The pair would be expected to have a jump-off, however, the Qatari athlete, Barshim, asked if the pair could share the medal – which was accepted.

But, Tamberi has revealed that the pair were asked not to have a lap of honour.

"They didn’t want us to do 400 metres with the flag, but I said we deserve it," the Italian said after the conclusion of the final.

Tamberi had already celebrated wildly, and the gold medal was the culmination of an incredible journey for the 29-year-old.

The Italian had suffered an Achilles injury days before the start of the 2016 Olympics that had ruled him out of the Rio Games, and he celebrated with the cast he used for the injury.

And despite warnings from the Olympic officials, the pair embarked on a lap of the stadium, with their flags, as they celebrated their small bit of history.

Do you think the pair should have shared the gold medal? Let us know in the comments section

The event took place before the final of the men's 100m.

And officials were presumably wanting to keep the track clear as not to delay the showpiece event.

Tamberi was waiting at the finish of the final when his compatriot Lamont Marcell Jacob shocked the world to take gold.