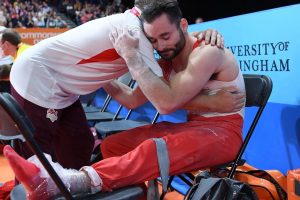 James Hall led the final after two rounds and injured his ankle while landing on the vault in round four, although he was able to complete the event. The 26-year-old needed assistance from his coach after completing his routine, with the roars around the arena in support of his valiant effort.

Hall matches the silver medal he won at the last Games in Australia and now has three individual silver medals and two team golds across two Commonwealth Games. He was ultimately defeated by compatriot Jake Jarman, whose score of 83.450 topped Hall by 0.550 points.

Jarman took gold in the tense final as the 20-year-old held on after leading going into the final round. It was his second Commonwealth Games title after Jarman won gold in the men’s team all-around final alongside Hall on Friday night.

He took the lead in the final after four rounds and secured the win following impressive performances on the rings, vault and the high bar. Speaking to BBC One, Jarman said: “I think I got a little emotional.

“It's quite overwhelming and I couldn't ask for a better competition; and being with James – he's been inspirational. I don't know how he did it.”

Were you impressed by James Hall's ability to overcome his injury to win silver? Let us know in the comments section.


Local Birmingham star Joe Fraser was tipped to win the title but he had to pull out with a broken foot. In his absence, Hall was set to upgrade the silver he claimed on the Gold Coast four years ago but his ankle issue sustained on the vault derailed his hopes.

Jarman earned a huge score and moved into pole position, and while Hall crawled off the stage following the parallel bars, the gold was still there to be won heading into the high bar. Unfortunately, Hall would narrowly miss out despite his Herculean effort.

“The pain was immense,” said Hall. “But Jake deserved it. He's got so much more to come.”