Harden ruled out vs. Kings with right ankle sprain 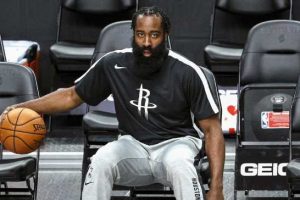 Houston Rockets star guard James Harden was a late scratch for Saturday afternoon’s home game against the Sacramento Kings due to a sprained right ankle.

Harden turned the ankle late in Thursday’s win over the Kings, but he was not listed on the official injury report. The Rockets announced that he would not play about 30 minutes before tipoff, after Harden had gone through his pregame shooting routine.

Harden, the NBA’s scoring champion the past three seasons, is averaging a league-leading 37.0 points and 11.0 assists through three games.

Eric Gordon, one of three key Rockets who missed the season-opening road trip due to the league’s health and safety protocols, replaced Harden in the starting lineup.