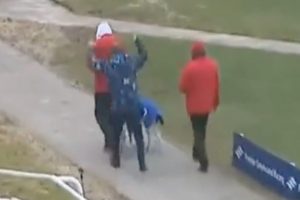 A Crayford greyhound handler was viciously assaulted by a yob while walking a dog to the trap on Wednesday (January 25) – with an arrest being made by police.

The handler could be seen walking a dog to the trap while wearing a hood before an unnamed man ran up from behind and leaped onto the back of the staff member.

He then aimed two punches at the head before seemingly throwing up a knee as the handler crouched, then hit him with further punches while holding his head in place before the track camera turned away.

With fellow handlers left dumbstruck by the incident as another staff member ran towards the altercation, the Met Police have since offered an update.

Their statement reads: "Police were called at 12.36hrs on Wednesday, 25 January to reports of an assault at a commercial premises in Stadium Way, Crayford.

"A man (no further details) was arrested on suspicion of causing actual bodily harm. Enquiries continue."

Racing fans took to Twitter to express their concern over the incident, with enquires ongoing. One said: "I was hoping someone else saw this. Hopefully the bloke is ok."

A second added: "Jesus Christ. Fair play to the person with the 2 dog getting the lead and the greyhound out the way asap."

Another, who feared for the hounds, posted: "Greyhounds really are good natured, can't handle any aggression at all, absolutely startled by that."

The incident took place at Crayford Greyhound Track in the London Borough of Bexley on Wednesday, a venue operated by Ladbrokes Coral.

The track first opened in 1986 and is one of 20 registered stadiums in the UK, with yearly prize money in the sport in the region of £15million.