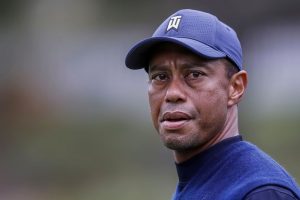 Tiger Woods might now be facing the one battle he just cannot win.

The golfing legend has been left with career-threatening injuries to his legs following a serious car crash in California that sent the sporting world into shock.

These are just some of the countless questions that remain unanswered as the inquest begins – and the potential ramifications send social media and American television into meltdown.

Woods hitting a tee shot out of bounds is big news, let alone him rolling his SUV down an embankment on the outskirts of Los Angeles and almost losing his life.

He is one of the richest sportsmen on the planet. A genuine icon. The first black man to win the Masters. Someone who has won 15 Major titles and a record-equalling 83 tournaments on the PGA Tour.

He's done things on a golf course no-one else has or perhaps ever will. He transcended his sport, while at the same time proving he is not just a genius with a club in hand, but also a flawed human being who makes mistakes in life like the rest of us. It all adds to his living legend.

Some people thought Woods was untouchable, that he could bounce back from whatever punches life threw at him and scale the mountain once again.

And after watching him win his fifth Masters title at Augusta back in 2019 against all the odds, after everything he'd been through, who could blame them?

To those of a certain age, the game of golf without Woods in it is almost unthinkable.

But what this week has reminded us of is how fickle and precious life remains. Greats like Woods are only immortal in peoples' imaginations. Like Rory McIlroy said, he's not Superman.

Yet it doesn't matter if he never plays again. What counts is that he's still with us and can continue being a dad.

Just over 12 months ago Woods was left stunned after learning of the death of close friend Kobe Bryant in a helicopter crash, ironically in the same state of America in which he almost lost his own life this week.

The basketball legend has been sorely missed and his achievements appreciated even more since his passing.

Which is why we should treasure and cherish watching special athletes while we still can. We might not see Woods hit a ball ever again, who knows, but we can still see the likes of Lionel Messi, Roger Federer, Tom Brady, Virat Kholi and Lebron James showcase their gifts.

James Child deserves huge credit for being brave enough to come out and speak publicly about his sexuality.

In an excellent interview this week, Child spoke of what life has been like for him as a leading referee and gay man.

Child just happens to be an official in rugby league, arguably the most macho sport in the business, one loved by working-class people with somewhat straightforward views on life, shall we say.

There can be no harsher environment in which to work and, surprise surprise, Child has revealed he's received almost constant abuse and even death threats for no other reason than the fact he is homosexual.

But what Child has done by talking about his situation publicly is be really clever and proactive in the fight against discrimination.

He's moved the goalposts so to speak – and shifted the emphasis back onto those cretins who still think it's a crime in 2021 to be gay.

People within the game already knew Child was gay, but some of those who targeted him could still claim to be just guessing that he was.

Now those same idiots have no excuse for being homophobic. It might not stop them, but at least Child has taken that defence away from them.

His job is to make the right decision on the field, not be gay or straight. Get over it.