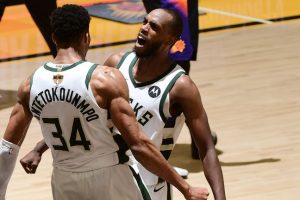 Giannis Antetokounmpo collected 32 points and nine rebounds to fuel the visiting Milwaukee Bucks to a dramatic 123-119 victory over the Phoenix Suns in Game 5 of the NBA Finals.

Khris Middleton added 29 points for the Bucks, who shot a blistering 57.5 per cent from the floor to win their third straight game and take a 3-2 lead in the best-of-seven series.

Milwaukee can clinch their second NBA title in franchise history and first since 1971 when they returns home for Game 6 on Tuesday night, live on Sky Sports Main Event and Arena from 1:45am.

Jrue Holiday had his best performance of the Finals with 27 points and 13 assists to bounce back from a dismal 4-for-20 performance from the floor in Game 4.

He also had a key steal of Devin Booker towards the end of the fourth quarter to thwart a late Phoenix comeback bid, before throwing an audacious lob that the colossal Antetokounmpo emphatically converted.

WHAT A PLAY IN THE CLUTCH 😱 pic.twitter.com/KUUDtxfNh7

The Bucks overcame an early 16-point deficit by erupting for 43 points in the second quarter and holding a three-point lead at half-time, an advantage they maintained the rest of the way.

In fact, Milwaukee became the second team in NBA Finals history to lead at half-time after trailing by as many as 15 points after the first quarter. The Boston Celtics previously accomplished the feat in the 1957 Finals against the St Louis Hawks.

Booker scored 40 points in a losing effort, marking the fourth time he reached the 40-point plateau in his first postseason. Chris Paul finished with 21 points and 11 assists while Deandre Ayton had 20 points and 10 rebounds for Phoenix.

The Suns trimmed a 10-point deficit to begin the fourth quarter down to three after Booker drained a three-pointer.

Antetokounmpo missed both free-throw attempts on the next possession and Paul made a driving layup to trim Milwaukee’s lead to 120-119 with 56.6 seconds remaining.

Holiday then stripped the ball from Booker for the second time on the night and set up Antetokounmpo for an alley-oop with 13.5 seconds to play. Antetokounmpo missed the ensuing free throw, but Giannis tapped back the offensive rebound and Milwaukee regained possession. Phoenix promptly fouled Middleton, who made one of two attempts to make it a two-possession game.

The Suns were scorching hot right out of the gate, making 14 of 19 shots from the floor and 5 of 6 from three-point range to seize a 37-21 lead after the first quarter.

The Bucks countered with a 29-12 run to start the second quarter. Bobby Portis capped the surge with a three-pointer to give Milwaukee a 50-49 lead. That second frame run proved key for the Bucks, and they now stand just one game away from glory.