Even though much of the NBA draft hype has centered on likely No. 1 pick Zion Williamson with the rest of the spotlight left for RJ Barrett and Ja Morant, it's worth examining the less obvious.

Who are the hidden gems?

Nobody expected players like Giannis Antetokounmpo (No. 15 in 2013 by the Bucks) or Damian Lillard (No. 6 in 2012 by the Trail Blazers) to become MVP candidates when they were drafted, and there's a decent chance someone will emerge from the June 20 draft.

DeAndre Hunter, Virginia. The 6-7 forward with a 7-2 wingspan has an NBA body and versatile inside-out game poised to translate to the next level — on both ends. He led the national champion Cavaliers in scoring and demonstrated massive potential in the title game with 27 points, including a pivotal three that sent it to overtime. At the No. 4 spot, the Lakers would be smart to select possible Kawhi Leonard 2.0.

WARRIORS WITHOUT DURANT: Are they better without him around?

NBA DRAFT LOTTERY: Pelicans aren't the only winners with No. 1 pick 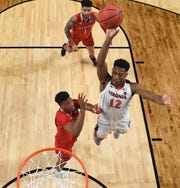 Jarrett Culver, Texas Tech. Culver is a 6-6 guard who has a ceiling that's hard to project. Will he be a role-playing shooting guard or go-to player? While his game translates as a two-way, defensive-minded player and facilitating wing on ball screens, it remains to be seen whether he has Jimmy Butler or Tracy McGrady upside.

Cam Reddish, Duke. If there was ever a player poised to separate himself, consider the Blue Devils' No. 3 option behind the hype train that is Williamson and Barrett. Reddish will become a better three-point shooter than his freshman year percentage (33%) shows and his natural ability as a 6-8 wing will help him be effective right away. With the right fit, he could develop much better than he did at Duke.

Darius Garland, Vanderbilt. The reason Garland could be this draft's major gem rests on the fact that not many folks heard of him when Williamson was dunking and Morant was dishing all over SportsCenter. That was also the case for Lillard at Weber State. Garland averaged 16.2 points on an irrelevant Vanderbilt squad before tearing his meniscus in November. It's the point guard's shooting that will entice scouts and make him primed to be the 2019-20 Luka Doncic.

Bol Bol, Oregon. The fact that Bol had his freshman campaign cut short due to a foot injury kept him out of the national spotlight and likely out of the draft's top-10. But he's an elite 7-footer with a great feel for the game and accurate outside jumper. The son of former NBA player Manute Bol averaged 21 points and 9.6 rebounds in nine games to provide a small but alluring sample size.

Rui Hachimura, Gonzaga. The 6-8 multidimensional prospect likely hurt his top-10 chances by opting to pass on the NBA draft combine where scouts could determine his top-five potential. That means the team that pulls the trigger on him will be hoping he becomes the draft's gem with his long-term upside. The All-American averaged 19.7 points and shot 59% in a breakout 2018-19.