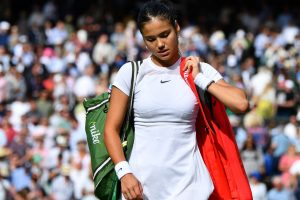 Tennis fans have slammed Emma Raducanu for her constant change of coaching staff after the Englishwoman suffered an early exit from Wimbledon.

The US Open hero, 19, travelled to SW19 without a recognised coach following the dismissal of Torben Beltz in April. The German guided compatriot Angelique Kerber to grand slam successes in America and Australia but was axed after just six months by Raducanu, following a dismal run of just three wins from 10 WTA matches.

In the past 12 months, Beltz, Nigel Sears and US Open coach Andrew Richardson have all had their contracts terminated by the teenager. Now the constant chopping and changing has been ridiculed by fans following her second-round Wimbledon exit.

"It's still mind boggling to me that Emma Raducanu fired her coach after winning the US Open as a qualifier without dropping a single set," tweeted one fan.

"Emma Raducanu badly needs to get herself a proper coach. Her game has fallen apart since the USO. Her serve is so poor and she makes so many errors. Her biggest problem though is her complete lack of movement. She's too reliant on her power," posted another disgruntled supporter.

HAVE YOUR SAY! Should Emma Raducanu have stuck with her US Open-winning coach? Let us know in the comments section below.

"Whoever Emma Raducanu's coach is has taken a strange approach to her game. When she won US Open, she was aggressive minded and hit through her shots. Her forehand seems extremely spinny now and she’s always on defense. Her serve is also lacking the punch it had at USO," concurred a third.

Despite reaching the fourth round of Wimbledon in 2021, the British no.1 was defeated in straight sets by France's Caroline Garcia. The 6-3, 6-3 result means Raducanu has failed to win successive matches at a Grand Slam since the fairytale of New York in September.

But the Toronto-born star has insisted the early exit will stand her in good stead for future matches. "Coming into this I didn't really have many expectations of myself," Raducanu told reporters.

"Playing on Centre Court again was a really positive experience for me. So, yeah, I can take it going forwards. I am 19 years old. Yes, I have had attention, but I'm a slam champion, so no one's going to take that away from me.

"If anything, the pressure is on those who haven't done that. There's no pressure. Why is there any pressure? I'm still 19. Like, it's a joke. I literally won a slam."