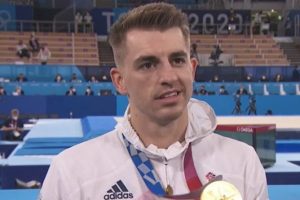 Max Whitlock was not prepared for a certain line of questions on BBC after winning Olympic gold in the men’s pommel on Sunday. The British gymnast was up first in the pommel final, meaning he had to pick his hardest routine to try and set a benchmark for his competitors.

A high score of 15.583 certainly did that as his rivals tried and failed to get close to it.

Chinese Taipei’s Chih Kai Lee was the only other competitor to get over 15, but he was still short of rivalling Whitlock for gold.

Once Japan’s Kohei Kameyama’s score of 14.600 was confirmed, Whitlock slumped his head in disbelief before celebrating with his coach Scott Hann.

Whitlock now has six Olympic medals and is the most successful gymnast ever on the pommel having won two Olympic golds and three World Championships.

The 28-year-old was lost for words after being given his gold medal, thanking those around him for their continued support.

When asked to sum up how he felt, Whitlock told BBC: “I don’t know how to.

“I feel absolutely lost for words but I can’t even describe the feeling. I feel completely overwhelmed and it feels very, very surreal.”

Whitlock was then asked to send a special message back home to his wife, Leah, and two-year-old daughter Willow.

And he was clearly apprehensive about answering the question, suggesting he may tear up on live television.

But the British gymnastic icon managed to hold back his emotions and deliver a sweet message to his family and friends.

“Don’t do that to me!” Whitlock said with a wry smile.

“Huge thank you to all of you for your support. It’s been incredible.

“I cannot wait to get back home and see everyone.

“Willow, I love you. I miss you. I miss and love you all. Thank you very much for everything.”