Home » NBA » Donovan Mitchell: Ten things about Utah Jazz superstar you might not know ahead of series opener against Los Angeles Clippers

Donovan Mitchell: Ten things about Utah Jazz superstar you might not know ahead of series opener against Los Angeles Clippers 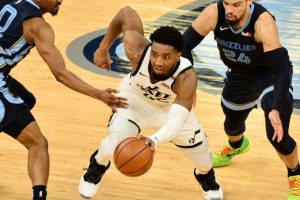 A Draft lottery pick in 2017, Donovan Mitchell has elevated himself from number 13 overall pick to leading superstar for the Utah Jazz in just four seasons.

The top-seeded Jazz get their playoff series against the Los Angeles Clippers under way in Salt Lake City.

Although being a team that is more about the sum of the parts than individuals, Donovan Mitchell is the man the hosts will look to for inspiration should they require buckets against the Clippers.

Here’s a look at 10 things to know about Utah’s standout guard, his life and his NBA career.

In 2013, the Jazz snagged a future Kia Defensive Player of the Year from the Denver Nuggets via a Draft-day trade when they acquired No. 27 overall pick Rudy Gobert. Four years later, Utah took a prime prospect from Denver once again. Although the Jazz were not slotted to pick until No. 24 and 30 in the 2017 draft, the front office worked its Draft-day magic again, sending reserve forward Trey Lyles and Tyler Lydon (the Number 24 pick in 2017) to the Nuggets for the rights to Mitchell.

Hall of Famer and former MVP Karl Malone crafted his legacy as a hard-charging, bruising and post-dominating power forward for 18 seasons in a Jazz uniform. Mitchell has been making his mark as a Euro-stepping, dunking and three-point shooting guard. Not much in common, there, right? But in an interesting turn of Jazz fate, both players share the same Draft slot in their respective classes: Malone going No. 13 in 1985 … and Mitchell going Number 13 in 2017.

Dunk Contest winner as a rookie

Aaron Gordon’s withdrawal from the 2018 Dunk Contest due to injury became Mitchell’s gain. The rookie delivered on the showcase stage, wowing the crowd with off-the-backboard dunks, a slam over three people (his sister, Kevin Hart and Hart’s son) and a reverse 360 jam – in a Vince Carter Raptors jersey – to cap the night and clinch the title. In doing so, he became the second Jazz player to win a Dunk Contest title (Jeremy Evans was the other one).

Before 2017-18 began, little was expected of the Jazz after leading scorer Gordon Hayward left for Boston in free agency. Mitchell, however, did not sit idly by and let those prognostications come to pass. He averaged 20.5 ppg, had two games of 40 or more points, seven games with 30 or more and nailed 187 three-pointers to set a rookie record. In the playoffs vs. Oklahoma City, he was even better. Mitchell averaged 24.4ppg while breaking the franchise’s single-game scoring mark for a rookie twice (he had 33 in Game 4 and 38 in Game 6) to surpass Malone’s mark. Utah won the series 4-2, and Mitchell became the seventh Jazz player to earn All-Rookie first-team honours.

Mitchell was a two-sport athlete growing up, playing both baseball and basketball. Additionally, his ties to the diamond run deep as his father was a former Houston Astros’ minor league player and now works for the New York Mets. Mitchell suffered a season-ending wrist injury as a high school sophomore and missed the AAU baseball season, which led to him focusing solely on hoops. Mitchell still gets his baseball fix at times, though, as he took batting practice at Citi Field in 2019 when the Jazz were in town to play New York.

Mitchell’s slithering drives to the hoop and acrobatic ability meshes well with his nickname of “Spida,” which is a play off of the Marvel character Spider-Man. According to Mitchell, he said his nickname pre-dates his NBA days and came from a team-mate’s father, who called him “Spida” because of his long arms and ability to get steals. Mitchell’s nickname also led to him being in a commercial and ad campaign with actor Tom Holland – who plays Spider-Man in the current Marvel movies – as a way to promote “Spider-Man: Far From Home” and Mitchell’s signature adidas shoes, The D.O.N.

Witness to a Decision

In the summer of 2010, then-Cleveland Cavaliers star LeBron James had captured the NBA and sports world’s attention with his televised free-agency special called “The Decision.” The event was held at the Boys and Girls Club of Greenwich (Conn.), where a 13-year-old Mitchell was a student at nearby Greenwich Country Day School. Per Yahoo Sports, Mitchell said he was in the audience when James made his choice to head to the Miami Heat. “It was in Greenwich, Conn., and I went to school in Greenwich [at Greenwich Country Day School],” Mitchell told Yahoo Sports. “So, as a big LeBron fan in the sixth grade, I forced my mom to let me go. I wanted him to go to Miami. I wanted him to get his first ring.”

Chicago Bulls legend Michael Jordan beat Utah to win his final two NBA titles, so longtime Jazz fans are often hesitant to embrace anything MJ-related. Mitchell wears number 45, which he picked as a tribute to Jordan and the jersey he wore in his NBA return in 1994-95 (instead of his usual number 23). “Everybody wants to be 23, but everybody forgets about 45,” Mitchell told ThePostGame.com in 2018. “That’s been my life. No one really notices me, or everybody forgets about me. … So I’ve always felt that extra chip on my shoulder, and that’s pretty much why I stick with 45.”

Bubbling over in Orlando!

The NBA’s restart in 2020 because of the COVID-19 pandemic led to unique playoffs. Mitchell took the opportunity to make his presence felt in an epic first-round series against Denver. First, he dropped 57 points in a Game 1 overtime loss, which marks the third-highest single-game total in playoff history and a Jazz playoff single-game record. Then, he scored 51 in a Game 4 win, joining Jordan and Allen Iverson as the only players to score 50 or more twice in a series. He averaged 36.3ppg vs. Denver, but Utah lost in Game 7 after going up 3-1.