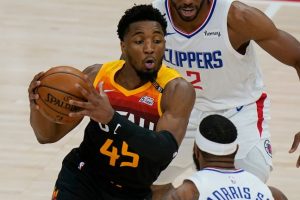 Here’s one for you: Who’s the best player over the past two postseasons?

Let’s see… the reigning NBA Finals MVP? LeBron James was indeed brilliant in the bubble, but he’s gone now. Same for Jimmy Butler, who led a spirited journey to the 2020 Finals for the Heat. Jamal Murray? He was a breakout star for Denver last fall but he’s injured and out of these playoffs. Anthony Davis? He couldn’t make it through without a limp.

The most rational, if surprising, choice is the player who just finished carving up the Clippers in the opening game of the second round in smashing fashion, just as he did to the Grizzlies in the first, and he still hasn’t matched the lofty level he enjoyed last playoffs.

If you’re not totally convinced about his candidacy, chew on this about Donovan Mitchell: He’s undefeated for 2021 so far.

And so, while it’s fair to marvel at Kevin Durant and Trae Young and Devin Booker and what Luka Doncic did in the first round before checking out, Mitchell is building big-time playoff credentials for himself – and could take the Jazz places if this keeps up.

He scored 45 points on Tuesday in Utah’s 112-109 comeback over the Clippers, and that is astonishing for a few reasons. One: He has already matched the great Karl Malone for most 40-point playoff games in franchise history, with four; Malone did that in 193 career playoff games to Mitchell’s 28. Two: This eruption by Mitchell continued a stretch of blockbuster playoff scoring games, dating back to last year with his pair of 50-pieces and a 44-pointer in that classic seven-game duel with Murray.

Mitchell looked right against the Clippers but he didn’t feel totally right; he was light-headed prior to tip-off, but any discomfort or handicap disappeared once it was apparent the Jazz weren’t winning this game without him delivering in a big way. The manner in which the Clippers built a 14-point lead and hit three-pointers with ease and took control despite mild efforts from Kawhi Leonard and Paul George were troubling signs for the No 1 seed in the West. Plus, the Jazz were missing point guard Mike Conley with a mild hamstring strain and therefore noticeably short an important piece.

This was all Mitchell needed to see. He took a cue from one of his mentors, Dwyane Wade, the new partial-owner of the Jazz who sat courtside and wasn’t shy about whispering tips to Mitchell during breaks in play. Mitchell scored 32 of his points in the second half to be the designated saviour the Jazz needed. The strong start by the Clippers, coupled with Utah missing 20 straight shots in the first half at one point, was all the motivation Mitchell needed to finish strong.

Also, remember that Mitchell missed Utah’s first-round opener due to a disagreement with the team medical staff over his sprained ankle; Utah fell to Memphis in that one but hasn’t lost since. Over the four games in that round, and now Game 1 in the second round, Mitchell has arguably been the best player on the floor.

And there’s this: Over his last 12 playoff games – seven last year, five this year – Mitchell is averaging 34 points, five rebounds and five assists and making nearly half of his overall shots and three-pointers.

One year after trading big shots with Murray in the bubble, Mitchell got the best of a duel with Ja Morant in the first round and clearly dominated both Leonard and George one game into the second. While those stars failed to bail out the Clippers when the game flipped suddenly in Utah’s favour, Mitchell was dynamic and forceful.

Step-back threes, mid-range pull-up shots, slashing to the rim, he gave LA the total experience. He had six three-pointers, went to the free throw line eight times, made 16 of 30 shots overall. It was a one-man demolition, made complete in the game’s final second when Rudy Gobert swatted away a game-tying attempt by Marcus Morris.

So until further notice, until someone else rises up and snatches the honour away from him, these are the Donovan Mitchell Playoffs. He is unbeaten and, five games later, unflappable.