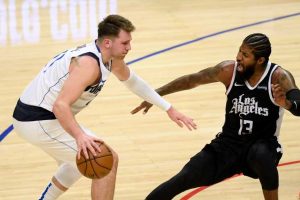 The Clippers exorcised their playoff demons on Sunday, beating the Mavericks 126-111 in Game 7 of their first-round series and advancing to take on the Jazz in the Western Conference semifinals.

Los Angeles may have won Sunday’s game, but Paul George may have still taken an L — after the final buzzer sounded. Cameras caught him and Dallas’ Luka Doncic talking after the game ended. It looked like a pretty nice moment of George praising Doncic’s excellent play in a losing effort; nothing strange about that at all.

Here’s where things got odd: George took off his jersey while the two talked, looking as if he wanted to offer it in a jersey swap. If that is indeed what he was trying to do, then Doncic rebuffed him:

It’s worth noting that the NBA doesn’t want players swapping jerseys amid the COVID-19 pandemic, so that could be a possible explanation for why Doncic (may) have turned George down. Of course, there’s also the possibility George merely took his jersey off to be more comfortable.

Either way, only George (22 points, 10 assists) will get the chance to put his jersey back on this year.

Doncic was fantastic in Game 7, putting up a game-high 46 points to go with seven rebounds and 14 assists. Curiously, that wasn’t the first time he was part of potentially meme-able moment: The first came in the first quarter, when he was on his back and gave the cameras a thumbs up:

Doncic scored 19 points in the quarter while helping the Mavericks take a three-point lead after 12 minutes. It was the only period Dallas would lead in the game.