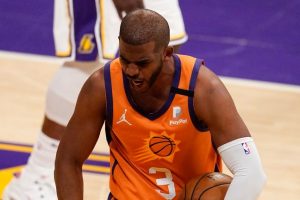 If you compare the 2019-20 Phoenix Suns on paper to this season’s roster, the top guys seem pretty familiar.

Arguably the biggest upgrade to that list was the addition of nine-time All-NBA player Chris Paul, who replaced Ricky Rubio at the point guard position after the Suns acquired his contract via trade with the Oklahoma City Thunder.

When Chris Paul goes to a new team, that team gets better.

That’s why many people are attributing Phoenix’s turnaround – from missing the playoffs last season to finishing with the second seed this year and defeating the defending NBA champions in the first round – to the future Hall of Famer.

Every team Chris Paul has been on has improved, so it’s no surprise that a Suns team that barely missed out on a playoff spot this year safely made it with him running the point.

His purpose on this squad was on full display in the close-out game against the LA Lakers last week, when the home team was building some momentum at the start of the fourth quarter and cut the lead to 10, it was Paul who hit a jumper to quiet the Staples Center.

He didn’t score much to kick the Lakers out of the playoffs, and was dealing with shoulder issues throughout the series, but his ability to control the rhythm of the game helped settle his team-mates in those final 10 minutes and lead the Suns to a 4-2 victory to advance.

He has gone from being the franchise player to a veteran presence on a championship contender.

We’ve seen it regularly in NBA history: Marc Gasol on the Toronto Raptors in 2019, Ray Allen with the Miami Heat in 2013, Pau Gasol on the Lakers in 2008 and Clyde Drexler for the Houston Rockets in 1995. But each of them joined a team that boasted a stud and a good supporting cast.

Paul is no different. This Suns team is built around Devin Booker, who has become one of the best scorers in the league and averaged 25 points with four rebounds and four assists this year.

They also boast a number one pick in Deandre Ayton, who is scoring 14 points – remarkably a career-low – and grabbing 10 rebounds this season, but has shown his importance in the playoffs, shooting 79 per cent from the floor and showed some surprisingly solid rim protection against the Lakers.

Meanwhile, Dario Saric has shown he is still an important part of the rotation, even if he has taken a step back behind the more athletic Cam Johnson this year, and Mikal Bridges is becoming a warrior as one of the most reliable players, the team’s best defender and a pretty good scorer this year.

So while Paul has been great at times this season and helped the Suns rise, he isn’t required to be the main guy – like he was in previous stops the New Orleans Hornets, LA Clippers, and even to some extent the Houston Rockets and Oklahoma City Thunder.

His 16.5 points this year is not a career low, but it’s not far off, and yet he was considered by some to be an MVP candidate. This high level of performance is why there are rumours that Paul will turn down the $44 million option on his max contract for next season.

But to those that were surprised at the size of the four-year, $160m contract he signed with the Rockets in 2018, will be flabbergasted to hear that he could be in-line for another three-year, $140m contract that would see the 6fter paid handsomely through to the age of 39.

There’s no doubt that Paul is one of the best point guards of all time, and should he win this season, it would put him ahead of John Stockton and Steve Nash, who never managed to take that championship step.

His age is a big reason the Suns were right to go all-in on making a run to the Finals this year, but the shoulder injury he suffered in the first round is cause for concern.

I stand by my criticism of CP’s contract from the time. Has it been worth it? Probably, he made every team better. Has he stayed healthy for any playoff run? No, and it’s possibly cost some teams a chip. Jimmy arguably has a better record in terms of health but age is undefeated. https://t.co/ojXBnHEKDb

Paul has had a long history of nagging injury issues, but in the second half of his career, they have almost always come as his teams have entered the playoffs: In 2015, he played all 82 games but suffered a hamstring injury to put him out of action in the Western Conference Finals and his Clippers – eventually lost to the Rockets in Game 7.

In 2016, he broke his hand heading into the playoffs and LA was swept by the Portland Trail Blazers. After joining Houston the following season, his team was up 3-2 to the Golden State Warriors but they lost two straight when his hamstring was injured again and he missed those two games.

That same hamstring injury caused him to miss time in the 2018-19 regular season and the Rockets had a worse record as a result. Last season, everyone thought the Oklahoma City Thunder had no hope, but he propelled them into the playoffs, where they lost a great seven-game series against his former team with arguably a lot less talent.

It showed that when Paul is healthy, he can be one of the most dangerous men on any basketball court, and his presence alone in the Lakers series helped the Suns progress.

Phoenix head coach Monty Williams has done a great job this season, building a system that maximises the strengths of Paul and Booker, both mid-range assassins, while freeing up Ayton enough to give him one-on-one match-ups deep in the paint, which he will win more often than not.

Played this series with heart and soul.

More to do. More to come.

They are surrounded by good shooters and defenders, and Williams is a motivational person that can bring the best out in players, especially when he has a coach on the court in Paul.

If a team offers him a max contract despite his injury concerns, then Paul should absolutely take it. With an injury list as long as his, and his respective age, few people will earn the type of money he is capable of making at this stage of his basketball career.

But there are precedents set by Tim Duncan, Dirk Nowitzki and even LeBron James to take smaller contracts in order to help their teams build champions. On the flip side, Carmelo Anthony and the latter years of Kobe Bryant might have sacrificed winning for person gain.

Paul’s latest injury shows that he is unlikely to be 100 per cent healthy for the rest of the playoffs, and they still have three series to go before there’s any chance of lifting a trophy, if his shoulder is capable of doing so.

Last NBA Championship for the teams left in the playoffs

With Lakers out, the field is wide open for a new franchise to swoop in and pick up a championship for the first time. That means there is little institutional experience of winning at this level remaining in the playoffs.

Some individuals – shout out Kawhi Leonard and Kevin Durant – have championship experience, but they are surrounded by several who do not know what it takes to lift the Larry O’Brien.

The Suns might still have a young core, but they grew a lot going 8-0 in the bubble last season and turning around a tough season that saw Ayton miss the first 25 games.

If Paul can help keep them composed while the young guns do the heavy lifting in the boxscore, we might see Phoenix rise from the ashes of a season that has decimated the NBA’s traditional franchises.

Want to watch even more of the NBA and WNBA but don’t have Sky Sports? Get the Sky Sports Action and Arena pack here