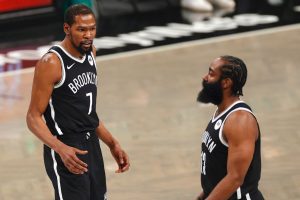 Baxter Holmes (@Baxter) is a senior writer for ESPN Digital and Print, focusing on the NBA. He has covered the Lakers, the Celtics and previously worked for The Boston Globe and Los Angeles Times.

Dealing with coronavirus was the priority for the NBA in 2020-21, but as we get to the end of the season, data suggests that the league saw a dramatic increase in injuries not related to COVID.

Some team health officials said the carry-over effects will drive how they manage player health for next season.

The average number of players sidelined per game due to injury, non-COVID illness or rest this season was 5.1 (includes both teams), according to ESPN’s Kevin Pelton, the highest since he started tracking it in 2009-10. That does not include games missed due to players in the health and safety protocols. The next highest was 4.8 so this season was 5% higher.

The increase was even more pronounced when focusing on the league’s stars. This season’s All-Stars missed 370 of a possible 1,944 games (19%), the highest percentage in a season in NBA history, according to Elias Sports Bureau. They missed an average of 13.7 regular season games each this year.

Throughout the season, team health officials and executives internally feared a spate of soft-tissue injuries, such as hamstring strains. Earlier this week, Nets star guard James Harden exited Game 1 of the second round against the Milwaukee Bucks with a right hamstring aggravation. Similarly, Jazz point guard Mike Conley will miss Tuesday’s Game 1 vs. the Clippers with a mild right hamstring strain. In the regular season, Harden missed more than a month and Conley missed six games in February and nine games in April and May with the same injuries.

These types of injuries can be tied to fatigue and stress. Fear of more of these injuries grew more pronounced when the schedule condensed late in the season as teams made up games postponed due to COVID issues.

There were 2,909 games lost to soft-tissue injuries this regular season, according to certified athletic trainer Jeff Stotts, who maintains the most authoritative public injury tracking database that covers the NBA. It’s the second-highest figure Stotts has recorded since he began tracking in 2005-06. The most was 3,038 in the 2017-2018 season, which was played in 82 games vs. the 72-game campaign this year.

One Western Conference athletic training official said that it was difficult league-wide to properly train players during the season, both because of the rigorous daily COVID protocols and because players were increasingly sleep-deprived, leading to more player rest and canceled shootarounds and practices.

“When you can’t train, you get soft-tissue injuries,” the athletic training official said. “It’s a known fact.”

Several team athletic training officials said they were more cautious than in recent years with players who seemed fatigued or were nursing minor injuries, leading to many being sidelined or playing reduced minutes for precautionary purposes. These training officials said they’re expecting to operate under the same circumstances next season, especially since the league is facing a second consecutive short offseason, furthering the cumulative effects of fatigue, stress and sleep loss from the past two seasons for players.

Said a second Western Confernece playoff team’s athletic training official: “[We] still have a contracted offseason (rest period) and just had a very high density of games; can’t imagine we are in the clear. I do have to think it will be better next year with a more normal schedule, but we can’t be sure the amount of load these players will be carrying into the start of camp next season.”

“It’s brutal in the aggregate,” added an NBA general manager.

Just in the past week, multiple NBA stars and coaches have discussed publicly the toll the season has taken.

“I always think from the moment we entered the bubble to now, it’s been draining,” a 36-year-old LeBron James said after his first-ever first-round exit last week. “Mentally, physically, spiritually, emotionally draining.

“Every team has to deal with it, obviously. But with us and Miami going the long haul in the bubble and then coming right back on short notice to this season, it’s been draining.”

The Lakers and Miami Heat, last year’s NBA finalists, faced a 71-day offseason, marking the shortest turnaround in the history of the NBA, NFL, NHL or MLB, according to Elias.

James and Anthony Davis battled injuries all season and appeared in only 27 games together.

Davis missed two months of the regular season with a strained calf and suffered a groin strain in the Lakers’ first-round playoff series. James missed 26 games with a sprained ankle in March and said after the season that it was still bothering him.

“We’ve been at this for a while, so where we’re headed first is rest,” Miami Heat president Pat Riley said after the Heat were swept by the Milwaukee Bucks in the first round. “Our players, our staff, the people that have been here every day, every single day, they’re mentally worn out more so than physically. And I think they just need to rest for a couple of weeks, a month.”

Said Denver Nuggets coach Michael Malone: “I think this year has been the hardest year in my 20 years in the NBA. It’s the mental toll, the physical toll, the emotional toll.”

And as an Eastern Conference GM said: “There will be a lot of stress pouring out after this season too.”

Sources say that the league disagrees that the schedule or short offseason has increased injuries or wear and tear on players or that it has limited the amount of time for rest and recovery. Officials note that in a normal calendar year, teams play 82 games and return after 14 weeks off. Over this two-year period, the average team played 20 fewer games than they would’ve played in such a stretch and had an additional two months off. Of course, those numbers don’t take into account the complicating factors wrought by the pandemic, such as early testing times or other elements tied to COVID protocols.

“It’s been an exhausting season for everybody, for every team, every player,” Golden State Warriors coach Steve Kerr said in late April. “The COVID protocols, the lack of emotional connection. Not being able to see family or friends on the road, go out to dinner, all the normal things that you do to kind of fill up your cup and complete your social life. You don’t have any of those things, so this season has been extremely draining.”

Sources said the league is expected to engage general managers and other team staffers on all manner of competitive issues, including the schedule, in a more formal manner in the near future, which will help inform how next season’s schedule is impacted.

“Everyone is a fan of less travel,” an NBA GM of a playoff team said.

But the prospect of a second consecutive short offseason is a topic that many around the league noted even as this season unfolded. The NBA Finals are scheduled to end July 22, with Summer League slated for August and teams potentially resuming training camp in late September before commencing a new season in October.

In talks between the players association, the league and network partners, the decision was collectively made to return the league’s schedule to normalcy as quickly as possible — a full 82-game slate that starts in October with a Finals the following June — rather than over a period of several years, league sources said.

“These two years have certainly been stressful from a lifestyle and mental health standpoint, and we shouldn’t overlook that,” NBA executive vice president of basketball strategy and analytics Evan Wasch told ESPN. “But from the standpoint of the actual basketball competition, when considering the reduced number of games in each of the last two seasons, and the aggregate amount of time away from the court players will end up having had between the hiatus and the two offseasons, we are not in a worse place in terms of overall wear-and-tear and rest and recovery time than we would have been over a normal two-year stretch.”

“The one thing that plays into this is just how fatigued everybody feels, which as we all know, is not unique to the NBA,” NBA senior vice president David Weiss told ESPN. “We’re so appreciative of the work that the athletic trainers and the doctors and the contact tracers and everybody who partnered in the health and safety effort of this season. It’s unbelievable how hard they had to work this year.”