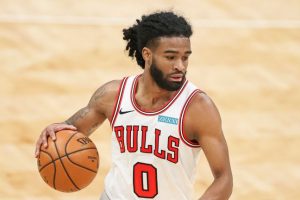 Chicago Bulls guard Coby White underwent successful surgery on his left shoulder on Thursday after an injury suffered at the weekend.

The team said White was hurt while “engaged in basketball activities away from the team” and will be re-evaluated in four months, throwing into question his status for training camp and the 2021/22 season opener.

Twenty-one-year-old White averaged 15.1 points and 4.8 assists while starting 54 of the 69 games he played in last season, his second in the NBA.

He started his final 18 games and averaged 17.6 points and 5.9 assists, while making close to 40 per cent of his three-pointers. White had what coach Billy Donovan last month described as an “up-and-down” sophomore season.

Coby White underwent successful surgery on his left shoulder today to repair damage from an injury sustained this past weekend while engaged in basketball activities away from the team.

He will be re-evaluated in four months.

The Bulls finished 11th in the Eastern Conference at 31-41, two games behind Charlotte for the final tournament play-in spot and out of the postseason for the fourth straight year.

The NBA told teams on Thursday that it intends to return to a normal schedule next season, with training camps opening in late September and the regular season set to begin on October 19.