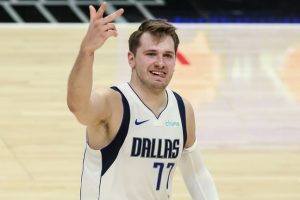 Luka Doncic has been unguardable in the 2021 NBA Playoffs.

To underline just how good he’s been across all facets of the game, the Dallas Mavericks superstar is the top per-game scorer in the postseason so far averaging 35 points per outing, and is also in the top 10 for dishing dimes (6th on 9.4 assists per game) and top 20 eating the glass (16th on 8.0 rebounds per game).

The Los Angeles Clippers are a team with a number of capable defenders, including the Klaw Kawhi Leonard whom many consider to be the best one-on-one defender in the NBA. But they just haven’t had an answer for the silky Slovenian.

Doncic can get buckets from deep-range, mid-range, at the rim, stepping back, fading away to the side… you name a shot and he can execute it.

in what might be one of the more absurd statistical individual playoff performances in a while, Luka Doncic just scored or assisted 31 of Dallas' 37 total field goals made in a 105-100 win.

here they are, in order from start-to-finish: pic.twitter.com/7Y9kmhi2fM

And if you commit multiple defenders to stop him scoring, his radar-like awareness of where his team-mates are and his ability to find them with passes delivered at the ideal height and pace for a quick shot mean that he will ensure the scoring column keeps ticking over for his side regardless of the coverage.

His most recent explosion at Staples Center saw him tally 42 points, 14 assists and 8 rebounds as the Mavericks took Game 5 on the road. In fact, the road team has won every game for far in this series.

Notably for Los Angeles, though, Luka clearly left his neck injury behind in Game 5, when he had 40 points after three quarters. And this is a player who thrives in the heat of the postseason. Doncic has played 11 playoff games and he has scored 40 or more points in four of them.

The Clippers cannot afford to let that happen again, you feel, in Game 6 or, potentially, Game 7. They are in win-or-ho-home territory and they will have to solve the Luka problem to have any chance.

The Inside the NBA crew of Shaquille O’Neal, Kenny Smith and Golden State Warriors star Draymond Green discussed exactly how they might set about that task.

O’Neal reckons some old-school going over the screen tactics might be the best way to unsettle Doncic and put him out of rhythm.

He said: “They’re going to have to make a decision. I am in no way a defensive specialist but I played against some amazing scores and we always made (one of) two decisions. (Either), ‘let him get his, but don’t let the help, help’ or ‘shut him down and make the others beat us’.

“Luka didn’t get a lot of help but he got some help from Tim Hardaway Jr (in Game 5). I have never seen that before, a team having five players in double-figures and then losing to the team that has two in double-figures. I’ve never seen it before but you can’t can’t let a guy continue to torch you at home with these points.

“I thought Kawhi Leonard and Paul George were ‘premier defenders’. He might have to go back to old-school basketball, get over the screen, because Luka’s smart. He’s dribbling, dribbling… ‘oh I want Patrick Beverley’, switch. He’s calling these people out and then and then once he gets rolling, and no matter who you got, he’s already hot.”

Smith disagreed with Shaq, though, and reckons that going over the screen would just play into Luka’s innate ability to exploit space, and also back players up with his frame when he needs to. He feels that a double-team would be a better answer.

The Jet said: “You can’t go over the screen. Only because, once he goes around, he seals you and plays and keeps you on, like you’re just dribbling a ball (away) from a 10-year-old and you’re just too big. And, he, because he’s 6’7 – which I was asking Draymond in the back, they’re the same size, but he’s heavier – now he could keep smaller defenders and bigger defenders on his back because of his width as well.

“So, to me, it becomes ‘if you don’t get through, we have to double – we have to double this guy and make him get 25 assists’. I’d rather see him try to get 25 assists, we know he can get 42 points and so I think there’s a double team that has to occur if you’re the Clippers. Or if you got in through, then you could play mano-a-mano, if you’re Paul George, or you’re Kawhi Leonard.

“Not just Luka. Any NBA great player who can score, you have to double them whenever they’re rolling. Steph Curry gets rolling, you got to double. Dame Lillard gets rolling, you’ve got to double him. There’s no NBA player that can really score the ball that you can continue to play one-on-one and get through screens.”

Green felt both points had merit but pointed to how the stats sheet from Game 5 demonstrates how the Mavericks are actually executing defensive tactics which, in terms of the shots they’re forcing from the Clippers, Tyronn Lue’s men would do well to adopt.

“Both of you are speaking on the defense, which I think is 100 per cent accurate,” Green said. “But when I look at the stat sheet, the thing that jumps out to me – and I know PG was in foul trouble – Reggie Jackson was 6-for-12 from three.

“So what you’re both saying that the Clippers need to do to Dallas, that is exactly what Dallas is doing to the Clippers. ‘Let’s make everybody else beat us’.”

Where all three men agree, though, is that if Doncic is taking the mantle on himself and is able to make shots down the stretch, then the Clippers will have failed in their quest to solve the Luka conundrum – and will probably become the second LA franchise to crash out of the playoffs in as many days.

If they can force the ball out of Luka’s hands down the stretch though, maybe they stand a chance.

Smith said: “And that (previous observation) goes back to (Shaq’s) point, if the Dallas Mavericks had five guys in double-figures, I don’t know if they beat the Clippers. (That means) the ball is spread out, that means when it’s crunch time the guy who might have the ball the most, wouldn’t have it possibly.

O’Neal added: “But you can’t let the nicest player on the court have a rhythm, taking 37 shots. And then he’s shooting fadeaways, calling people out, catching them out and laying them up.”