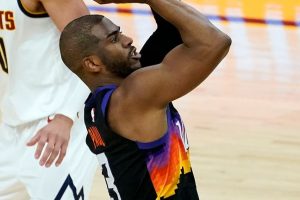 You saw the Denver runs.

Overcoming that’s a daunting challenge for most teams, but most squads are not steered by Chris Paul the “Point God,” who seized control in the fourth quarter of Game 1 of the Western Conference semi-finals to push Phoenix to a 1-0 lead in this best-of-seven series by way of a 122-105 win over the Denver Nuggets.

Paul finished with 21 points, including 14 in the fourth quarter alone on 6-for-6 shooting with 11 assists and only one turnover before dishing one last pass to his Suns team-mates in the postgame on-court interview.

“Not impressed or surprised, just I’m happy that everybody is getting to see this on a national stage,” Paul said. “[Devin Booker] is special, been special. Now, everybody is just getting a chance to see it. Y’all [are] getting to see stuff that we already knew. Mikal Bridges, Jae Crowder, the grit that he brought to our team, Cam[eron] Payne; we have a real team, a great coaching staff and at the end of the day, we’re just having fun.”

All eyes were on Paul in the opening minutes, especially after his ailing right shoulder was inadvertently bumped by Denver point guard Facundo Campazzo.

He grimaced for a second. His movements were a little tentative, his shots did not look quite right.

Suns fans would have been concerned watching on as it comes after he battled shoulder trouble throughout the series against the Los Angeles Lakers where he averaged just 9.2 points per game, partly because of the sore shoulder he hurt in the first half of Game 1.

But as happened in Game 1 of that series, the veteran overcame the pain helped lift his team-mates around him to take the opener.

Paul became just the third player 36 years or older who had at least 20 points and 10 assists in a playoff game, according to ESPN Stats & Info. Steve Nash and John Stockton were the others.

Trailing by 10 points at the 8:13 mark of the third quarter, Phoenix sped off on a 28-9 run over the next 7:02 with Bridges nailing a 26-footer off to give the Suns a nine-point lead going into the fourth quarter. Paul missed each of the three shots he fired in the third quarter. But when winning time came, Paul delivered with back-to-back buckets that punctuated a 6-0 Phoenix run to start the final frame. Paul pulled up for a 15-footer with 10:27 left to play over Michael Porter Jr. that put the Suns ahead by 15 points and prompted a timeout from Denver coach Michael Malone.

Over the first three quarters of the game, Paul shot just 2-for-8 for 7 points, before his fourth-quarter takeover.

“I don’t think not making shots is going to rattle him,” Suns coach Monty Williams said. “I think he’s more concerned with managing the game than his shooting percentage. He made some big shots. That’s who he is, whether it’s facilitating and getting the ball to guys where they need it or in those moments being able to knock down a shot.”

One mid-range jumper fell and then another. A short floater found the net and then a three-pointer splashed home as the crowd roared. The 11-time All-Star looked like his usual self, the rest of the Suns followed suit and Phoenix rallied to take Game 1 of the Western Conference semi-finals in front of a raucous sellout Arizona crowd.

“We felt that energy,” Booker said. “We felt the passion. He just made plays.”

The flurry came much to the delight of the 16,319, who anxiously watched the point guard’s every move.

“This crowd is crazy,” Paul said. “There’s nothing like it. This is why we fought so hard during the regular season to get home-court advantage.

“It was fun to get out there and be involved. That last series – that was tough – but I’m glad to be back helping the team.”

Jokic finished with a team-high 22 points on 23 attempts from the field, producing his final bucket of the night with 1:54 remaining in the third quarter on a putback layup. Ayton outrebounded Jokic 10-9.

By the time former Nugget Torrey Craig caught a lob from Payne with 8:36 remaining, the Suns were finishing up a stunning 42-14 run dating back to that early third-quarter 10-point hole.

“I felt our defense in the first half compared to the second half was night and day,” Malone said. “We knew they were gonna make a run at some point. We did a poor job of handling that run.”

Now the Nuggets need to find a way to rebound for Wednesday’s Game 2 at Phoenix Suns Arena, which hosted a sellout crowd in Game 1 of 16,219.

It’s also worth noting Malone said that Porter “tweaked” his back in the first half of Monday’s game, but expects him to be ready to play in Game 2.