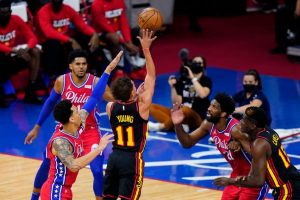 Charles Barkley believes the Philadelphia 76ers are already in trouble in the Eastern Conference semi-finals series against the Atlanta Hawks.

The Hawks grabbed a 128-124 win at Wells Fargo Center as Trae Young produced another postseason masterclass on the road.

His floater is automatic. Young’s soft release on his high arcing shot over taller defenders creates easy buckets. Sometimes the shots are confused for lobs and snatched by his team-mates for easy jams (Clint Capela got credit in Game 1 for an accidental alley-oop).

Take that away, no worries. Young is almost as skilled as knocking down threes from just over the line – the half-court line.

“It’s really just figuring out what type of defense they’re in and attack it,” Young said. Confidence has never been a quality the 22-year-old has been lacking.

Danny Green had the defensive assignment and could not stop Young in the first half. Green said Monday it’s not “an individual effort” to stop Young.

Such has been Young’s mastery so far in the NBA Playoffs and in Game 1 against the Philadelphia 76ers, Inside the NBA analyst Charles Barkley is worried about his former team.

‘Chuck’, whose jersey hangs in the rafters in Philadelphia, said: “My Sixers are in trouble. They can’t guard [Atlanta]. There’s nobody they can put out there for Trae. They tried Danny Green [and] the problem with (Matisse) Thybulle is you [can’t] have two non-shooters out there [which will be the case if you play both him and Ben Simmons].

“If you put Thybulle out there, you’re going to have two guys who can’t shoot and that’s really going to shrink the court for (Joel) Embiid.

“Trae’s going to have an advantage [and Bogdan] Bogdanovic, he had three threes. I could watch him shoot a basketball all day. Even when he missed it looks like it’s going in! And then you put (John) Collins out there, who is shooting the ball [well] and getting lobs.

“Then what was really hurting the Sixers, they’re attacking Joel Embiid. They’re putting him in the pick and roll every time, so he has to come up for Trae. And that’s why (Clint) Capela’s getting all those lobs.

“They’re going to have those advantages in every game. I hate to say this, I think my Sixers are in trouble.”

Shaquille O’Neal was also impressed with how the Hawks played in Game 1 and wants to see the same hunger from their young team in Game 2.

He said: “They know what they have to do. Trae is playing fabulously, Collins is… they’re all playing like a team and they’re playing well. Hopefully they don’t get comfortable with saying, ‘Okay, we got Game 1, we now have the home court advantage’. I want to see if they if they have that instinct to [say], ‘Okay, we know what we’ve got to do, we know we can beat them. We know the intensity they’re going to bring, let’s get Game 2’.

“They’re a young team so I’m anxious to see how they come out and play. Either [way] they’re still going to have home court advantage, but I want them to have that killer instinct.”

Young certainly seems to have that within himself.

He took a bow in New York, then took his breakout postseason off-Broadway to Philadelphia where he helped the Hawks pull off a Game 1 stunner and grab control of the Eastern Conference semi-final.

“This is his stage now,” Hawks forward Solomon Hill said Monday. “He has the opportunity to play the best basketball of his career at the right moment.”

Young scored 25 of his 35 points in the first half on Sunday in a game where the Hawks led by as much as 26 points. Young’s dominance at the basket may have fallen off a bit in the second half – as the Hawks saw their lead sliced to two – but not his court awareness. With the Sixers on a run, Young let an inbounds pass bounce and roll on the court for nearly 20 seconds, methodically devouring critical time needed in Philadelphia’s comeback attempt.

Barkley and O’Neal’s fellow Inside the NBA analyst Kenny Smith believes that maturity he has displayed means the 76ers are now going to have a rethink about how they defend him.

He said: “Philadelphia do realise that Trae Young is a star, meaning this. There’s very few guys in our league who could have the ball in their hand for 80 per cent of the possessions and everyone is really going to be dictated [on in terms of] what they do. Luka (Doncic) does that, James Harden can do that, LeBron (James) obviously can do it.

“Trae Young is learning to do that and he’s doing it [in this year’s playoffs] and so now you have to make the decision, which you probably didn’t have to make in the last couple of years, [which] is: ‘Do we double him early and make him give it up early? Or do we allow him to be the scorer and not the passer?’

“I don’t think that anyone before these playoffs was making that decision with Trae. I think Trae was making the decision, ‘I’m going to do this tonight’ on not and [he] didn’t do it as well.

One of the key team stats which popped out from the first game was the fact the 76ers gave up 19 turnovers for 28 Atlanta points.

Barkley thinks that Young’s unsettling effect may also have contributed to that for the 76ers.

He added: “The reason they turn it over because the Hawks, Nate McMillan has got them playing good defense and Trae is a problem.

“The first decision Doc Rivers gonna have to make is who I’m going to put on Trae. I personally think it’s got to be Ben Simmons. They’ve got to hope his length and his size bother Trae but you can’t put Danny Green on Trae.”

Simmons was an NBA defensive player of the year candidate for a reason, so it was a bit puzzling he did not get an earlier call to guard Young on Sunday, with the assignment going to Green instead.

Simmons had four steals in Game 1 and said he was ready to get the assignment on Young for Game 2. Much like he has all season, Simmons again struggled from the free-throw line, going 3 for 10. Simmons believes he could use 6-foot-10 frame against the 6-foot-1 Young to his advantage.

“I’m looking to come in there and see if I can be a little more physical next game and see if the refs are going to let us play a little bit,” Simmons said.

Trae Young becomes the second player in NBA history to score 30 points in each of his first 4 career playoff road games.

He joins Kareem Abdul-Jabbar, then known as Lew Alcindor, who did it for the Bucks in 1970. pic.twitter.com/W2qJtYophd

Young joined Kareem Abdul-Jabbar of the 1970 Milwaukee Bucks as the only players in NBA history to score 30 points in each of their first four career playoff road games.

Here’s the hook for the rest of the series: If Young can maintain his pace – creating his own open looks and setting up team-mates for their own – then the Hawks just might be East contenders. Young downplayed his own milestones in the Game 1 win when he became the first player in Hawks history to score at least 35 points and have 10 assists in a playoff game.

“None of these guys care about it in this room. All we care about is wins,” he said. “That’s what we’ve been doing and taking care of business. We just have to have that same mentality going forward. If we do that, we’ll be OK.” 76ers center Joel Embiid took at least one hard hit to the court when he lunged to commit a foul late in the game and acknowledged “playing on a torn meniscus is not easy.” Coach Doc Rivers said he checked in with Embiid about five times during the game to see if the big man was still feeling good enough to play through the cartilage tear in his right knee. Rivers often says all minutes are not played evenly, because superstars are asked to do more on both ends of the court, and Embiid played a hard 38 minutes.

“I think we always have to worry,” Rivers said Monday. “I don’t think we’re out of the woods. I think after each game, he’s going to be evaluated for a while. I don’t know how long that lasts. It may be three, four, five games.”

Embiid said there is not much he can do except keep the knee iced, keep it elevated and manage the pain and swelling. The NBA MVP candidate insisted if he’s playing, he’s not on the court worrying about his knee.

“If you look at the history, every time I’ve had an injury, it always feels like I never miss a beat,” he said. “I go out there and I’m not thinking about what happened or what may be going on. It may be bothering me, but I’m just not thinking about it. I just want to focus on giving my all, just playing hard every single possession.”