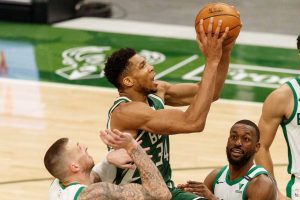 It is one of the rarest individual accomplishments in NBA history. Only three players have ever won three consecutive Most Valuable Player awards.

Can Giannis Antetokounmpo become the fourth this season?

After hovering just above .500 for the first two months of the season, the Milwaukee Bucks are dominating again, led by Antetokounmpo. They've won eight in a row and 13 of 14 after holding off the Boston Celtics 121-119 on Wednesday.

Antetokounmpo had an off night (13 points, eight rebounds, seven assists, 4-of-11 shooting), but he's put up big numbers during Milwaukee's current streak. With recent injuries to Joel Embiid and LeBron James likely keeping those contenders sidelined for significant stretches of time in the second half of the season, the MVP race is open for Antetokounmpo to seize frontrunner status.

It seems silly to think Antetokounmpo wouldn't be a top MVP contender when his numbers — 28.6 points, 11.6 rebounds, 6.4 assists, 55.9% shooting — are comparable to his MVP campaigns of the last two seasons. "Voter fatigue" may or may not be a real thing, but the historic nature of three consecutive MVPs can't be overstated: Bill Russell (1961-63), Wilt Chamberlain (1966-68) and Larry Bird (1984-86) are the only players in history to accomplish the feat.

The MVP field remains stacked, even if Embiid and James fade from consideration due to missed games. Nikola Jokic, Damian Lillard, James Harden and Luka Doncic are all having incredible seasons, among others.

If Antetokounmpo continues to dominate and the Bucks stay near the top of the Eastern Conference, there's no reason to think he can't join Russell, Chamberlain and Bird with an historic MVP three-peat.

Here are four more things to know Thursday in the NBA:

It's trade deadline day, and there could potentially be a flurry of activity ahead of Thursday's 3 p.m. ET cut-off. USA TODAY Sports is keeping tabs on all the activity and moves in our live trade deadline tracker. For everything to know ahead of the deadline, check out our roundtable discussion where we gathered NBA reporters from around the USA TODAY Network to break down which teams are ready to make a move and which star players are most likely to be dealt.

KYLE LOWRY: 'The greatest Raptor ever' prepares for his potential departure

It goes without saying that the Brooklyn Nets need their star trio of James Harden, Kyrie Irving and Kevin Durant to meet their lofty expectations. But Wednesday's game offered a glimpse of how rough things can be when those three don't play in a 118-88 blowout loss against the Utah Jazz. The Nets shot 36.1% from the field, including 20% from 3-point range, in their lowest-scoring game of the season. The lone bright spot for Brooklyn was a 23-point, 15-rebound double-double from Alize Johnson, who signed a 10-day contract Monday.

Oklahoma City Thunder point guard Shai Gilgeous-Alexander will miss a "significant amount of time" with plantar fasciitis in his right foot. Coach Mark Daigneault said Wednesday the Thunder will be cautious with Gilgeous-Alexander because the injury had "red flags all over the place." The 22-year-old is averaging a team-high 23.7 points and 5.9 assists per game this season and has established himself as the centerpiece of Oklahoma City's rebuilding efforts.

Mark Daigneault: “It sounds like it was a little bit more cumulative, I don’t think it’s something that happened on a particular play” (2) pic.twitter.com/JwfzvLgzZd

Game of the night: Blazers at Heat

Miami is stumbling again, losing four in a row after reeling off 11 wins in 12 games. Portland has dropped two straight. Blazers star Damian Lillard is second in the league in scoring at 30.1 points per game, but the Heat have a top-10 defense and numerous long, flexible wing defenders to at least make things tough for Lillard.