Home » NBA » Bronny James is a legit NBA prospect — and the son of a former LeBron teammate is, too

Bronny James is a legit NBA prospect — and the son of a former LeBron teammate is, too 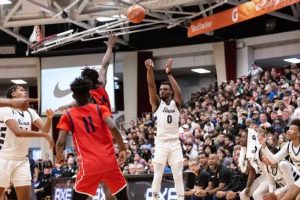 The Hoophall Classic is considered the premier high school basketball event, an annual tournament pitting the best prospects in America against each other at Springfield College, where James Naismith invented basketball in 1891.

Dozens of five-star recruits across the 2023 to 2025 classes were in attendance at Hoophall, which opened its doors to NBA teams for the first time as part of a change in philosophy from the league office allowing scouts to evaluate high school prospects live in their most natural setting.

NBA executives got to see Bronny James, Cameron Boozer, Cooper Flagg, D.J. Wagner, Isaiah Collier and Mikey Williams among others, and for many it was their first impression of some of the top prospects in the 2024, 2025 and 2026 NBA draft classes. NBA draft insider Jonathan Givony recaps what we learned over a three-day window.